Three recipes cooked for pudding club so far in 2018, none of them blogged! #thehorror

At the start of the year, I was very taken with the new  Mary Berry TV series and there were a few things I wanted to cook. Her truffle chocolate pots looked super – a chocolate mousse with some of the mousse reserved and magicked into truffles to put on top. The recipe and her photos are here.

The mousse component was fine.  I mean, sure, it’s a faffy way of getting a food processor dirty to make a mousse – previously I have whisked the egg whites and folded into melted chocolate + yolks instead, but that’s not entirely safe if you might be feeding the immunosuppressed.

But the recipe for the truffles on top just didn’t work.

For starters the centres were incredibly sticky and refused to be rolled without extreme fridging and adding in extra icing sugar and cocoa. 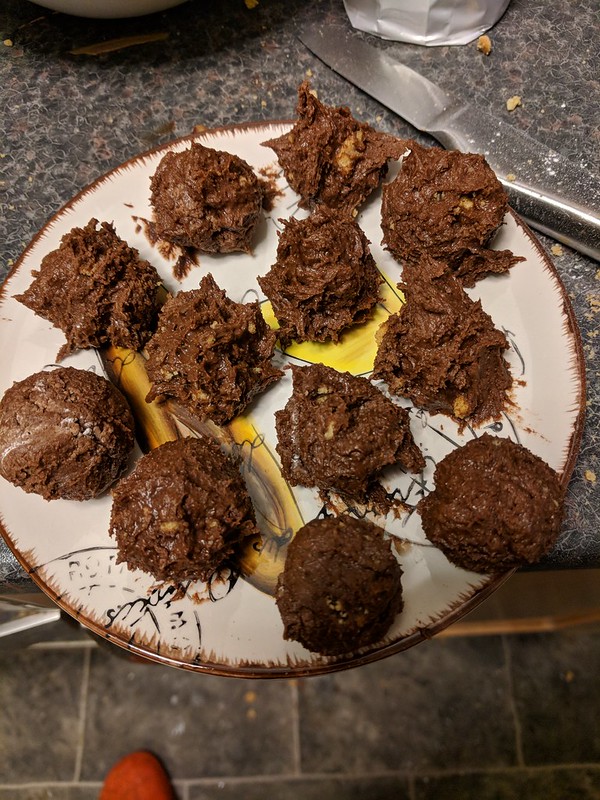 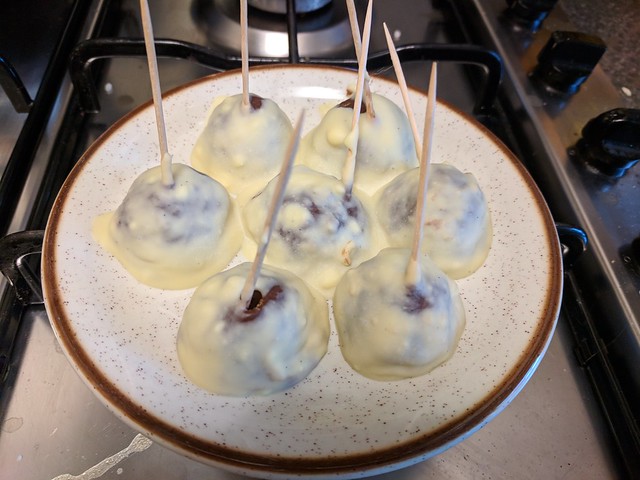 Really, you need to temper chocolate to make it do that. And that’s nowhere in the recipe.

The final pot was delicious, but I totally failed to make it pretty. (Story of my cooking!) 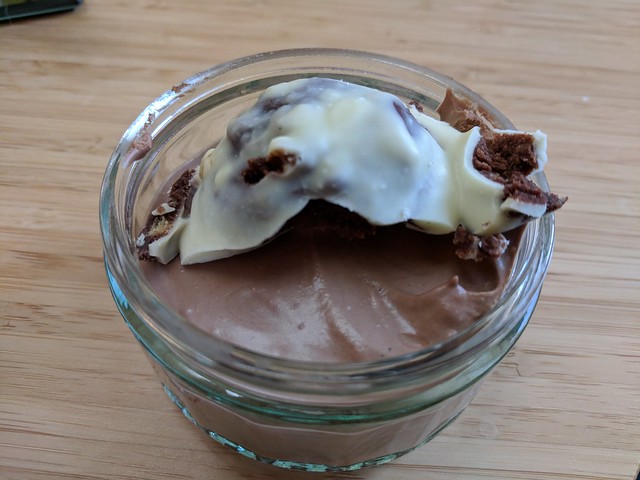 For my next triumph, I made a chocolate cake in a frying pan!

No, I can’t remember why, either, but it was quite nice. The recipe had an interesting frosting and some interesting questions about American recipes. What is “Dutch” cocoa for example? We thought it was probably something to do with the difference between what we in the UK would call cocoa and drinking chocolate. I just used Bourneville. To make matters worse, the frosting calls for quality milk chocolate and I just used Dairy Milk. You could taste that it was Dairy Milk in the finished article and although we all knew that was bad, it turned out to be quite a nostalgic flavour for us all.

I also forgot to take any pictures, apparently…?

For our most recent outing to Pudding Club, my hosts provided this awesome Baked Alaska as the pudding, so I made the main course for a change. 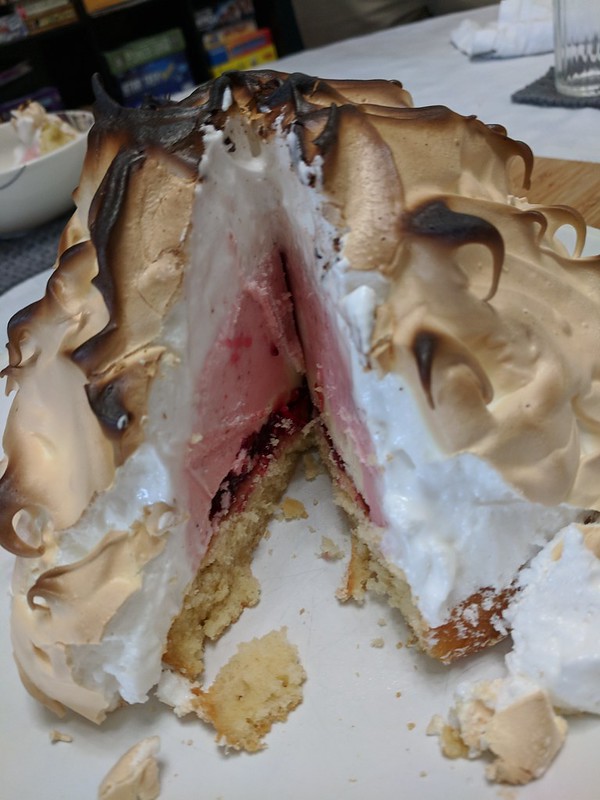 I had previously halved the ingredients and just done the chicken component of Nigella’s Chicken Shawarma as a midweek supper; but this time, I bought everything needed for  the sides as well, including things that didn’t sound like I would especially like them… pomegranate seed bejewelled tahini flavoured yoghurt? But it turned out lovely, actually.

The chicken by itself had garnered a “you can make that again”, and it is fantastic, really delicious. The marinade is not hard, but it does have quite a lot of ingredients, and ideally you need to do it the day before. Getting the seeds out of the pomegranate is fun. Whack! whack!  Now, what to do with the rest of the jar of tahini?!  (Quick google, and these catch my eye: cookies, salmon, lamb, peanut hummus!)

This paprika smells wonderful and I am looking for excuses to cook more with it: 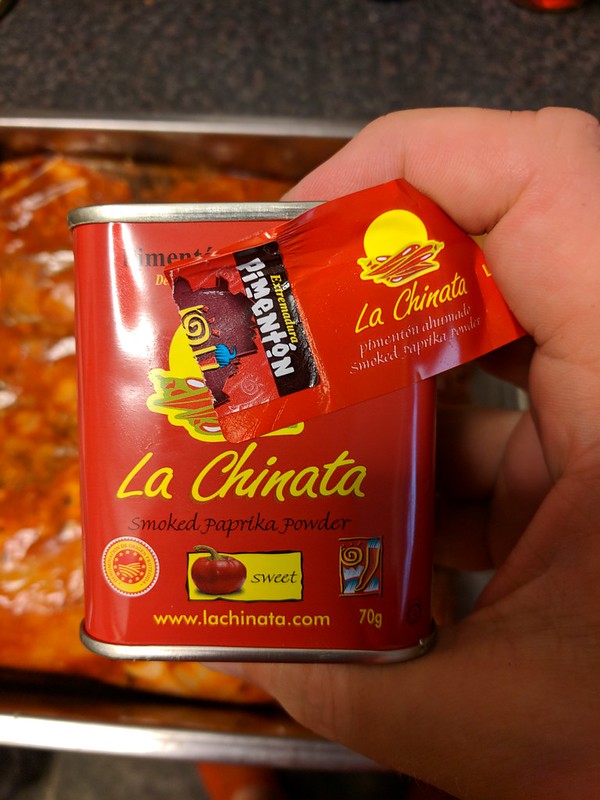 There’s lots of ingredients for the marinade but nothing is actually difficult. I left the coriander out because I don’t like it (tastes soapy to me) and so don’t have any. 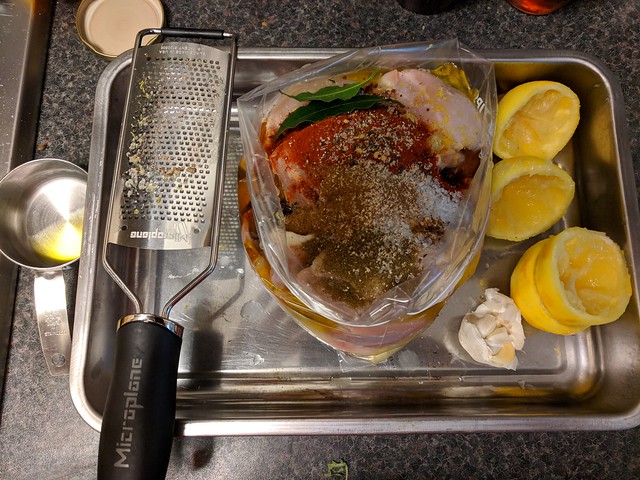 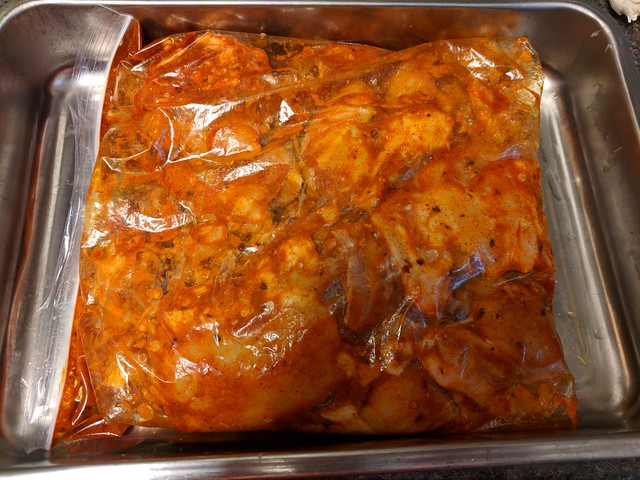 Hot oven for 30 minutes, then serve on a bed of lettuce and drizzle over the oily juices.  Unless you are, as Nigella says, for some inexplicable reason, anti-oily-juices. 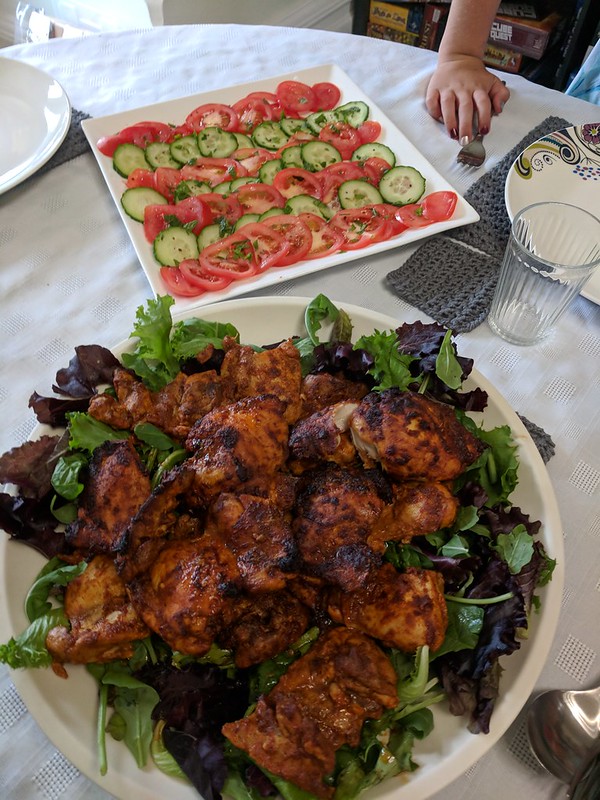 Serve with salad and a pomegranate/yoghurt/tahini dip. 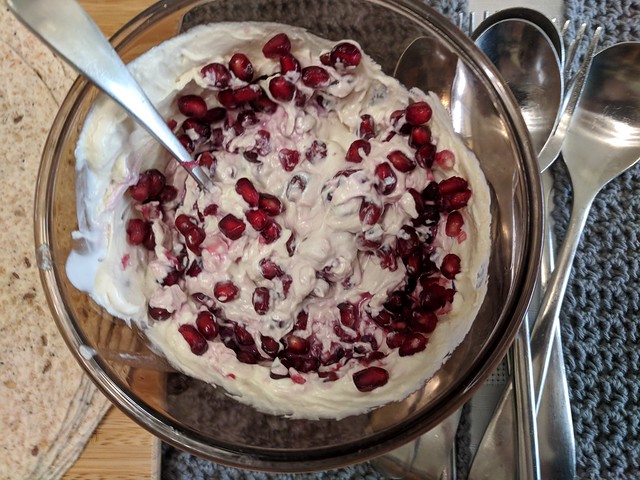 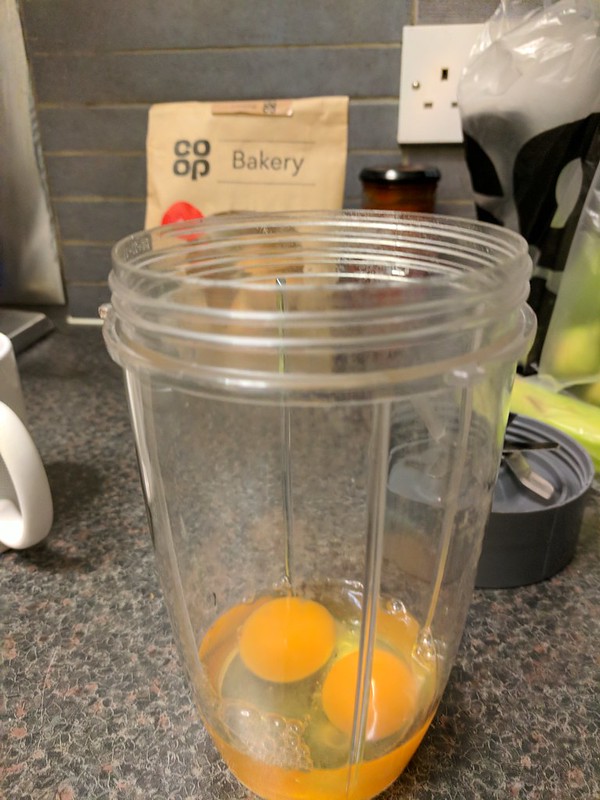 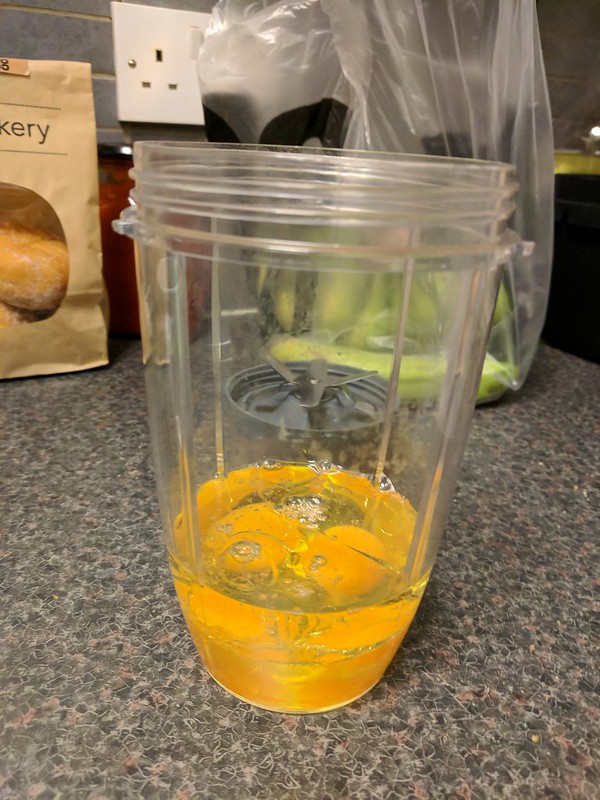 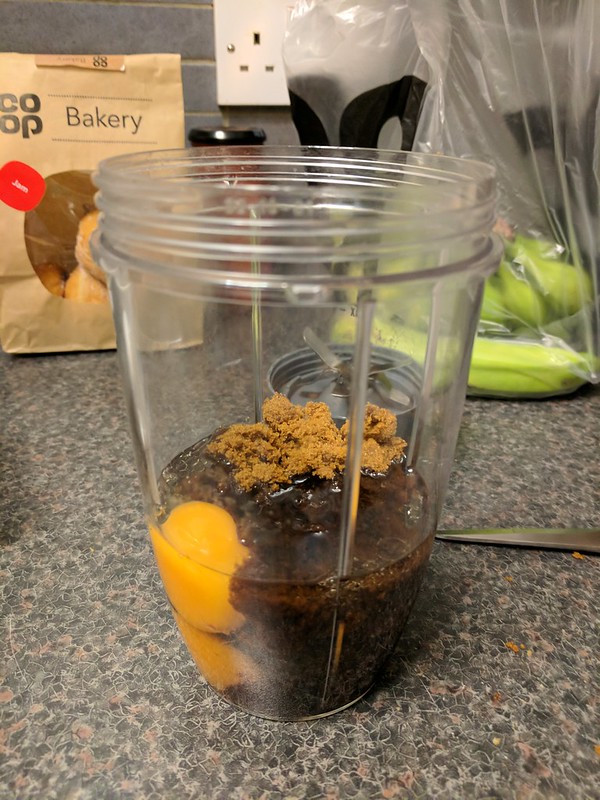 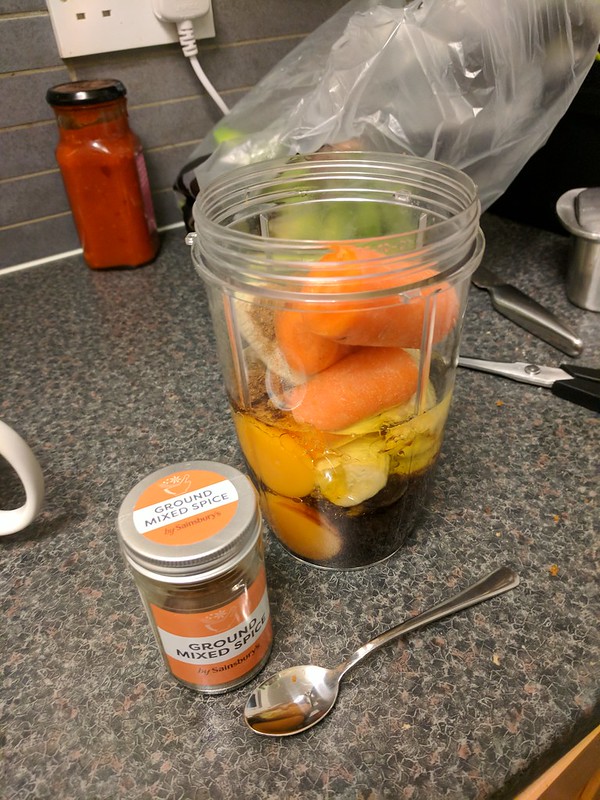 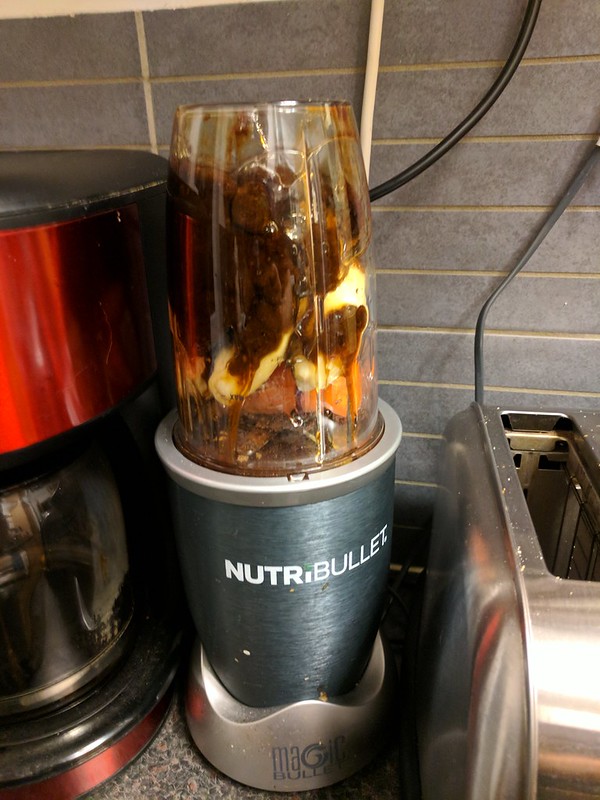 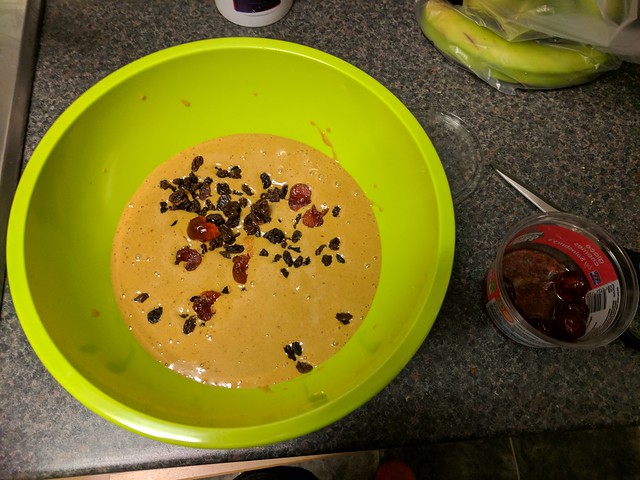 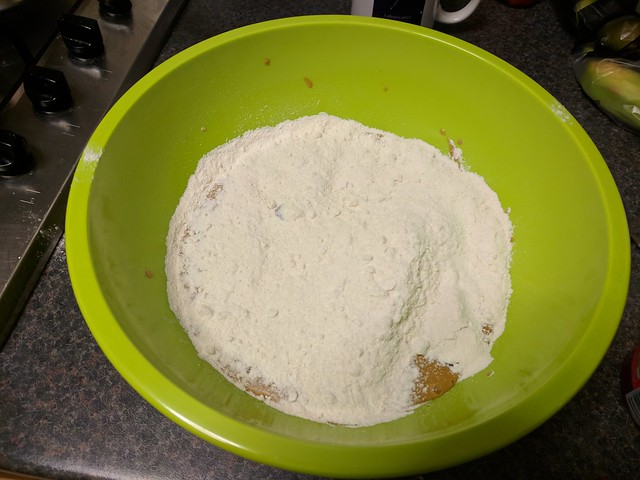 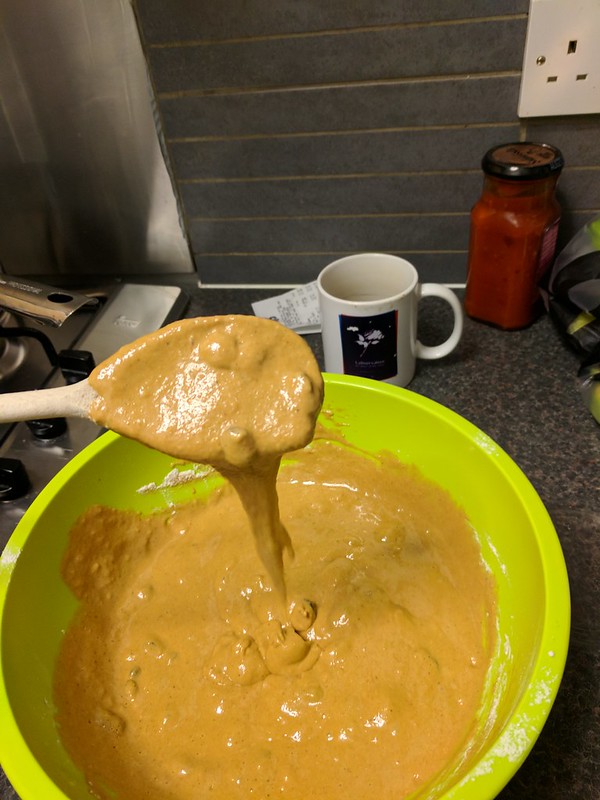 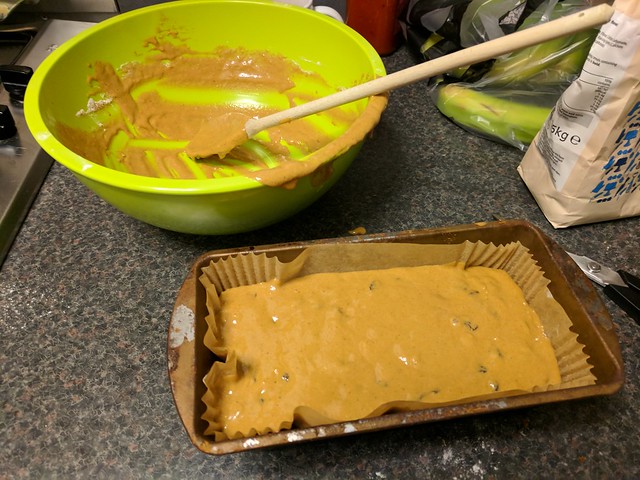 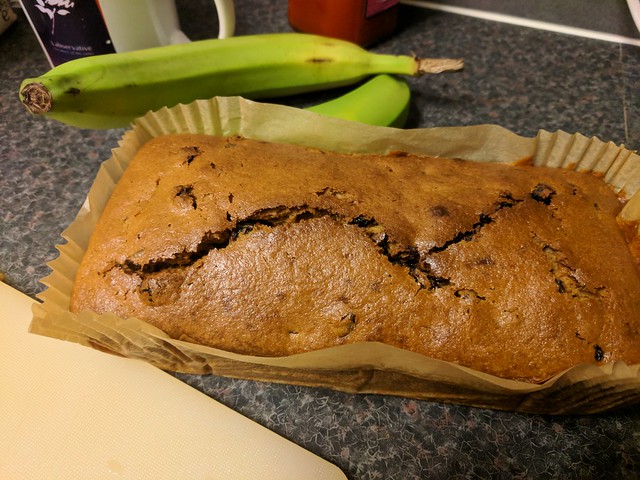 With a little help from Mary Berry I have been making a banana loaf most weeks for the last two months or so. Since my Nutribullet

lives on the counter it’s quite tempting to use it for other things, and making cake is definitely something it can do.  Even with the blender available to me I have found myself overoptimistic about how many bananas I can eat in a week.

I prefer my banana loaf less plain than the Berry version, so here is what I have been making:

Line a 2lb loaf tin – I use Loaf Tin Liners

Put the dry ingredients in a bowl.

Blitz the wet ingredients in the nutribullet.

Pour the wet ingredients into the dry ingredients and stir well. Pour the batter into the loaf tin and bake for an hour.

Check after 45 minutes. If the cake is browning on top but still moist inside, cover with tin foil to stop the crust burning.

If after an hour the skewer is still not coming out clean – this is a moist, heavy cake, after all – turn the oven off and allow it cool with the cake still in.

Variations
The same fundamental method works with other fruit, not just bananas. I’ve tried a pear and chocolate cake by substituting three pears for the bananas and adding two tablespoons of cocoa into the flour.

Since the nutribullet means you can blitz any fruit into a liquid, rather than mashing bananas with a fruit, you can turn pretty much anything into a cake.  On much the same basis that you can hide vegetables you don’t like in a nutribullet with fruit you do, you can also put vegetables into cake this way.

I don’t see the need to use baking powder as well as SR flour – too much and you end up with a cake that gives you heartburn.

Various things – friends visiting to see our new chickens, the last opportunity for Pudding Club before term starts again and a new found fatalism on the weight front (yeah, topping 100kg again!) has meant I have been cooking an awful lot of cake this week. I made…

Which I burnt. Things I learned: a four egg mix is a good amount for my sandwich tins. 2oz of buttercream is not really enough to fill it and it takes an awful lot of jam. I need to turn the oven down. It’s really enough to combine the mix quite loosely – I would normally cream the butter with the sugar quite vigourously before adding the eggs and flour. This recipe calls for all the ingredients to go in at once and only basic mixing. And it’s fine for it.

Things I learned: a one egg sponge mix is ample to fill all four of the dinky new cupcake moulds I got for my birthday. Two spoons of instant coffee for the buttercream and two in the cake mix is about right for my taste but a bit too strong for everyone else. I need to work on my two tone icing technique and on icing more generally.

Things I learned: this is easier than it looks. It uses a lot of eggs (might be a good thing once the birds start laying!) No flour! I turned it into a sort of Schwarzwaldkirschroulade with half a bag of frozen cherries turned into a simple jam by boiling with sugar and bits of port and kirsh I had knocking around. I make sure the sponge was good and damp and boiled some of the left up juice to a slightly stiffer set to make a drizzling jus for presentation:

An old favourite. I don’t think I’ve ever made them without burning them a little, however – in this case, although they looked blackened they didn’t taste burnt at all.

What I learned: the recipe fits neatly in my large rectangular roasting tin – I’ve always used my round 9″ cake tin before. If you leave them to prove whilst ringing for a wedding, they will likely go over the top of the tin.

But they will still taste delicious and wonderful anyway.

This recipe is a good’un and came out with the desired highly squidgy interiors. The recipe is extremely detailed, and I might have glossed over the finer points.

I had to pop off to Dunelm to buy a new tin for making the swiss roll needed for the roulade, and whilst I was there, bought a square tin for brownies and tray bakes, which I have felt I needed for a while. This recipe fills it really well.

The picture shows afternoon tea with tuna and yellow pepper sandwiches, a small plate of cucumber sandwich bites, strong black coffee, and brownies and cinnamon buns for after.

Perhaps the main thing I learned is that my mobile phone takes horrible food pictures!