Over – gulp – five years ago I wrote this blog about things I’d tried in the classroom and enjoyed, or felt beneficial.  Most of them I no longer do. I’ve lost my dice, somehow.  It’s quite moving to reread my own enthusiasm from my NQT year.

Snakes and ladders I recently did again as a no-planning revision activity that worked quite well, but we had to borrow dice from a colleague when I discovered halfway through the lesson that mine were missing. It involved a plain snakes and ladders grid with the numbers 1-30. Students spend the first half of the lesson in pairs producing 30 target language sentences with their English language translation, then the second half with another pair playing snakes and ladders. To successfully land on a square a student has to do the translation from the other pair’s list. This has the benefit of a) making them look in their books for 30 minutes and b) getting them to encounter slightly less familiar language from someone else’s book. Mine were a young class so I relented and they did 15 key words from the topic and 15 sentences.

Top tip on dice – buy foam dice. They’re cheaper, and they make much less noise than a class set of heavier ones.

Anyway, quiz quiz trade.  I have quite a lot of sets of cards I have made and I still use this fairly regularly with most of my classes. The  basics are in my original post, link above, and there’s a one-slide instruction powerpoint included in my TES resource on where you live in German.

If you are struggling with students going off task whilst doing this (it’s a moving around the room task, some students use this as an excuse to natter) here are some strategies:

Employ a TL police officer – allocate one student to take names of people not doing the task properly and have a moderate sanction.  I’m sure you can think of a child in every class who is reasonably well liked but who would jump at the chance to dob in classmates. #stanfordprisonexperiment

Set a target – each person must trade at least 7 times in the next 5 minutes.

Join in – have a card yourself and be part of the activity.

Make explicit what they need to know –  there will be a quiz at the end and if you don’t know then sanction.

Deploy inside/outside circles – if you feel the need to be much more in control then instead of allowing the students to roam freely, you put them two lines facing each other and then control who moves, eg one person from line A goes from bottom to top, line B doesn’t move. Everyone does their trade simultaneously then they move as instructed.

Have a plan for what to do at the end. – eg recently I was practising opinions about school uniform in German that practised a variety of opinion structures: ich mag / ich mag… nicht. Ich liebe/ich hasse … gefällt mir (nicht). ich trage (nicht) gern.  At the end they needed to write down 8 examples that got one of each structure.

Anyway, the main point of this was to talk about a series of QQT activities I have been doing recently and enjoying and which the students seem to have got a lot out of too. It can be quite time consuming…

The start of this has to be where the entire class has been writing their own sentences using reasonably constrained vocab – enough for everyone to have written personal sentences, but so that everyone has used the same core language and no-one has gone massively off-piste and written something so personal no-one else will be able to understand it.

For example, a German class has been writing opinions about food and using adjectives to make comparisons. So they have all been working with the same opinion structures, the same list of food words, the same list of describing words – delicious, deliciouser, crispy, crispier, juicy, juicier.  With some support they can all recognise all of these words and structures.

From the sentences you then get the students to write their own QQT cards with TL sentence at the top and English at the bottom, and, crucially a big space in the middle. I havae been doing this on single-sided A5 scrap paper.  (The first few times this takes quite a bit of explanation, but we get there eventually.)

They play QQT as the plenary to one lesson, and then you collect in the sheets as they leave.  You then divide the English from the TL and sort through the TL to make any corrections as necessary.  I have also been typing up the list of TL sentences for use later on.

The following lesson, students collect TL and English sentences at random so that each student sentences which do not match.  Whilst you take the register they think in silence about what each of their sentences would be in the other language.

The actual activity is then aural dominoes / follow me. A student reads her TL sentence, all students look at what they have in front of them, and the person who has the English puts their hand up, reads it out and moves on with their own TL sentence.

In the classes I’ve done this with recently, it’s been quite engaging. Easily enough to get students past their natural antipathy of speaking foreign out loud and almost enough to get a chatty class quiet. In one younger class where it took longer than 25 minutes and I felt it was dragging a bit, I tried to end it prematurely only to have the students insist we continue to the grim end and give every single person the opportunity to read their TL sentence out loud.

And the typed up selection of sentences?  So far I’ve used them in a couple of ways. One class needed refresher revision – they did the first stages before Christmas, and then after the holidays I gave them a selection of sentences back as a translation task.  For another I am holding onto them and plan to use them for the 1 pen, 1 dice translation task that is presently all the rage.

Forgive me reader, it’s been over two years since I last blogged the annual performance of my solar panel. 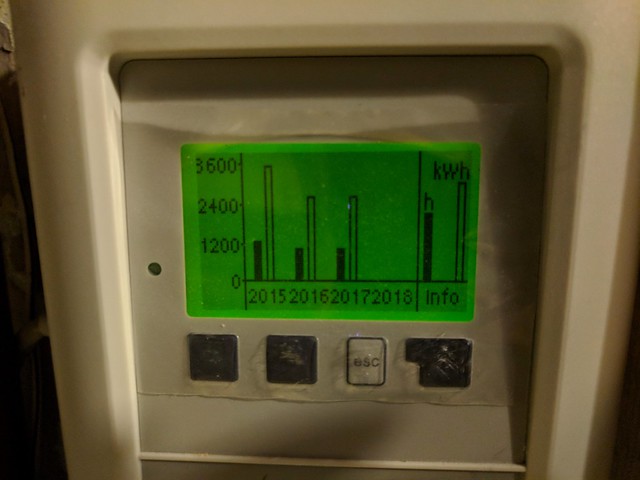 A photo this time rather than a screen shot as since I upgraded my computer I have been unable to re-download the software that would allow me to connect my new computer to the controller. This is rather annoying because I paid extra for the computer control facility.

Rather suspiciously, the controller reports almost identical kWh outputs for the last two years, although that is lower than the previous three.

I will estimate it as 2,700 kWh per year. Nottingham Energy Partnership have an Energy Costs Comparison table. I neglected to look at it last year, so will have to use the data from last month now to estimate the financial value of the heat we got from the sun. I use the gas rate of 4.6p/kWh, since if the water were not heated by the solar panel, it would be heated by gas.

September will see the eleventh year of operation. When it was installed, we needed to put in a new hot water tank which was bigger than the old one, so the installers had to demolish my airing cupboard to fit it in. In the eleven years since, I have yet to sort it out.

There are all sorts of flawed assumptions being made to come to that figure, so take it with a fairly large pinch of salt.

If you are considering a solar panel of your own, whether for hot water or to generate electricity, and you live vaguely near Nottingham, do please get in touch with Sungain at Nottingham Energy Partnership, who would be delighted to let you know what to do next. You can also follow them on Twitter, and they also have a very helpful service on their website that lets you compare your electricity and gas tariffs and see if you can save money.

Buckets more information about my own solar panel under this link.

And a declaration of interest: I’m on the board at Nottingham Energy Partnership, where they very kindly describe me as an “energy expert.”