Forgive me reader, it’s been over two years since I last blogged the annual performance of my solar panel. 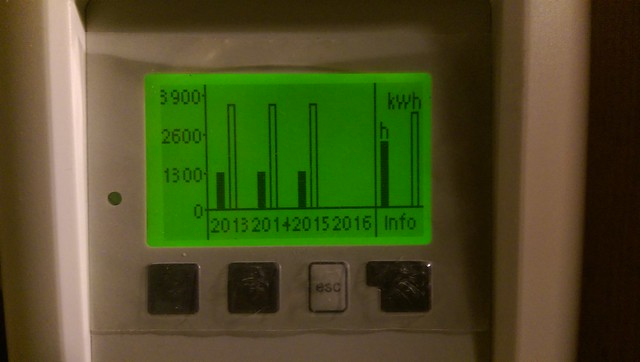 A photo this time rather than a screen shot as since I upgraded my computer I have been unable to re-download the software that would allow me to connect my new computer to the controller. This is rather annoying because I paid extra for the computer control facility.

I will estimate it as 3,800 kWh per year. Nottingham Energy Partnership have an Energy Costs Comparison table. I neglected to look at it last year, so will have to use the data from last month now to estimate the financial value of the heat we got from the sun. I use the gas rate of 5.19p/kWh, since if the water were not heated by the solar panel, it would be heated by gas.

September will see the ninth year of operation. When it was installed, we needed to put in a new hot water tank which was bigger than the old one, so the installers had to demolish my airing cupboard to fit it in. In the nine years since, I have yet to sort it out.

There are all sorts of flawed assumptions being made to come to that figure, so take it with a fairly large pinch of salt.

If you are considering a solar panel of your own, whether for hot water or to generate electricity, and you live vaguely near Nottingham, do please get in touch with Sungain at Nottingham Energy Partnership, who would be delighted to let you know what to do next. You can also follow them on Twitter, and they also have a very helpful service on their website that lets you compare your electricity and gas tariffs and see if you can save money.

Buckets more information about my own solar panel under this link.

And a declaration of interest: I’m on the board at Nottingham Energy Partnership, where they very kindly describe me as an “energy expert.”