The wug test is something you do to prove that young children are internalising the rules of the English language. You show them a wug, and there is a short dialogue: “This is a wug. Now there are two of them. There are two _________ ?” Most children over two or three will know the answer is wugs.

I was just googling this and found there’s a wealth of wug related material.

Firstly, there’s a lovely website with many of the original drawings, from 1958.

This is quoted in the wikipedia page for Jean Gleason, who devised the test and a bunch of others I’d not seen before. “This is a dog with QUIRKS on him. He is all covered in QUIRKS. He is a _________ dog.” and even better, “This is a very tiny wug. What would you call a very tiny wug? This wug lives in a house. What would you call a house a wug lives in?” which prompted the commenters to speculate – wuggery? wug-wam? wugloo?

Then this fabulous cartoon. 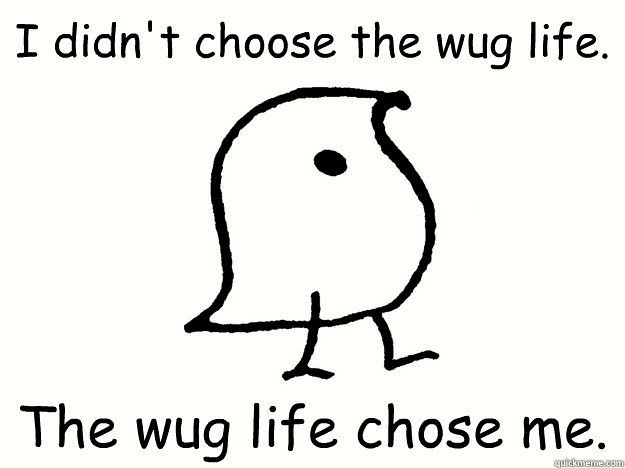 I once tried to use wugs as a spring board to talking about German plurals but it proved counter productive. We got a little bit obsessed with wugs and kinda didn’t pay a lot of attention to the actual real point of the lesson.

Oh look, you can even get a wug mug!

I’ve been doing avoir to the Pink Panther theme since finding this lovely TES resource at the very start of my teaching career.

Last week I found I didn’t really have anything for haben and wasn’t that impressed with my options. I went googling and found some absolutely lovely Mozart songs for both key German verbs that are very catchy, slightly silly, and will be used by me for ages to come.

I even wonder if we can get them into the soundtrack for foreign trips.

(This is from the Magic Flute and I’m quite interesting in trying to find sheet music. It’s classic choral harmony and I can’t hear it without trying to busk through all the parts)

This is also a great excuse for singing the Queen of the Night song. Not that I would ever do that in front of a class (ahem!).

Up until now I had been doing both sein and être to the tune of Michael Finnegan. You have to include the English in this to work as well. “Ich bin, I am, du bist you are, er ist he is…” and so on.

Both sein and être also work nicely to the Mission Impossible theme. You can fit versions of the whole verb both to the bass introduction and the treble theme once that kicks in.

There is also this balmy and awesome aller song to complete the trio of vital French irregular verbs.

The images are starting to be dated, and some classes can be obsessed with the visuals whilst not listening to the actual French, but it still plays well with most groups. I generally use it with older classes as we start really working on the near future tense. Using mixed / boy and girl bands to explain ils and elles is inspired and chimes much better with students than “on the day the priest visits the convent, they turn from elles to ils.” (although I still tell that story too)

If you are actually going to sing the songs yourself to your class, you need to practise privately before trying to do it with everyone, so you can be consistent with your underlay (how the words fit the tune.) This is why several bemused colleagues have put their head around my classroom door in the last week to find me singing Pink Panther in a darkened classroom. Even my set of personal pronoun hand gestures isn’t moving enough to turn the occupancy lighting back on.

These wonderful youtube videos mean you can use song to teach verbs even if you are the sort of teacher who does not sing yourself.

Stop press – here’s a version of the Pink Panther powerpoint converted to a youtube video!

My differentiation on this – ALL do the jazz hands on vous allez MOST sing all the words SOME sing in tune.

People have been posting links about the telly on the day they were born for the last week or so and I have been fairly sceptical about whether I would be interested. The BBC have produced a gizmo that checks TV listings from as far back as 1923.

But when I went over to check a Thursday in 1978, it was actually quite fascinating.

Not very many programmes per day – there was Open University first thing, two chunks of the morning with BBC1 not running at all, and an awful lot of children’s programming that was repeated so much it’s in my memory as well as on the day I was born. Jackanory, the Mr Men and Paddington.

Despite it being August, there is the Christmas Day episode of Belle and Sebastian.

For the evening, it’s Holiday Report (“…based on two people sharing”), Dr Who (banned from watching as a child because we had too many nightmares based on it). A Barry Norman Hollywood retrospective, I Clavdivs, and two hours of the opening ceremony of the Commonwealth Games – “live coverage by satellite from Canada”. Ooh!

Not that my mother would have been aware of any of this after, hours of labour in a cottage hospital followed by an uncomfortable 40 mile ambulance trip on poor country roads for an emergency Caesarean in Shrewsbury. Undiagnosed breech.

I had been thinking for a while that I would like to get a slow cooker again. I had one before that I eventually put onto freecycle because there were too many annoying things about it. It was a sealed unit, which meant washing it without getting its electrics wet was a pain. It was pretty small. And there had also started to be a taste that came through everything I cooked it that was annoying me.

So we’ve gone many years without one, but recently I started to think it might be a nice thing to have again, when low and behold, there were suddenly half-price ones in the supermarket and so one came home with me.

In its first three weeks here we’ve put it to use two or three times a week – most obviously for casserole type things. We’ve had a lamb tagine, a chicken chasseur and a strange thing that I don’t think I shall make again, with chicken breasts in pineapple juice.

I used it almost entirely successfully to roast a chicken and then to make stock from the bones. The soup I then made with the leftovers was not a success, however. I have still yet to make a nice soup out of chicken bones.

In addition to that, it’s done sterling service preparing fresh homemade soups to take to school for a low calorie lunch most days of the week. Leek and potato soup was a success, if slightly potatoey. I’ve also been saving parmesan rinds for probably two years now, just for adding to leek and potato soup as per Julie / Julia. And then when I made it, I forgot!

At the moment we are cooking a French onion soup. The slow cooker was brilliant for caramelizing onions in the first place – chopped onions with a bit of butter or olive oil, seasoning, and sherry vinegar, just left in the machine on low overnight and with the door shut (so the delicious smell doesn’t invade the house.) In the morning add enough beef stock to cover the onions and then plenty more and leave it to cook all day.

It’s been busy over the weekend as in addition to Saturday night and Sunday making soup, it spent all of Saturday cooking baked potatoes. 8 hours on low with foil wrapped baked potatoes inside, plus an additional foil parcel with chopped leeks. Then scoop the centres of the potatoes out and combine the leeks and potato flesh with cream cheese and seasoning, stuff into the skins and microwave a little to compensate for the chill from the cheese cooling it down. Unfortunately this way the potatoes are not very crisp on the outside.

The one slight niggle is this machine has a timer. The maximum amount of time it will cook for is 10 hours, then it switches to warm. We are almost always out of the house for far longer than 10, which means things cooking all day for far longer than is really ideal. If I set it going at 7am, leave for work, don’t come home till 6.30, and don’t want to eat till 8pm.

Ideally I would like to cook one night and prepare the slow cooker meal at the same time. But with the slow cooker you have to put things in it warm, so this has meant preparing tomorrow’s meal, putting it in the fridge, and then reheating it on hob over breakfast (porridge in one pan, chicken chasseur on another, whatever you do, don’t mix up the wooden spoons…) and then setting it going.

What should I make in the coming weeks?