I’ve been getting excited about it for months. I initially thought it would be an interesting way of having a second go at mass catering in my house after a friend’s vegan supper club  over five years ago. I bought a spare table and thought I could sit 14 and started to think about the logistics of cooking so much. I bought tablecloths that turned out to be way way too big and ended up using my old  but lovely ones. I used the day to day charity shop crockery and a bit of the tea set for desserts.  I bought new tart moulds to be able to make a lot of cheesecake and not fill the fridge up too much. 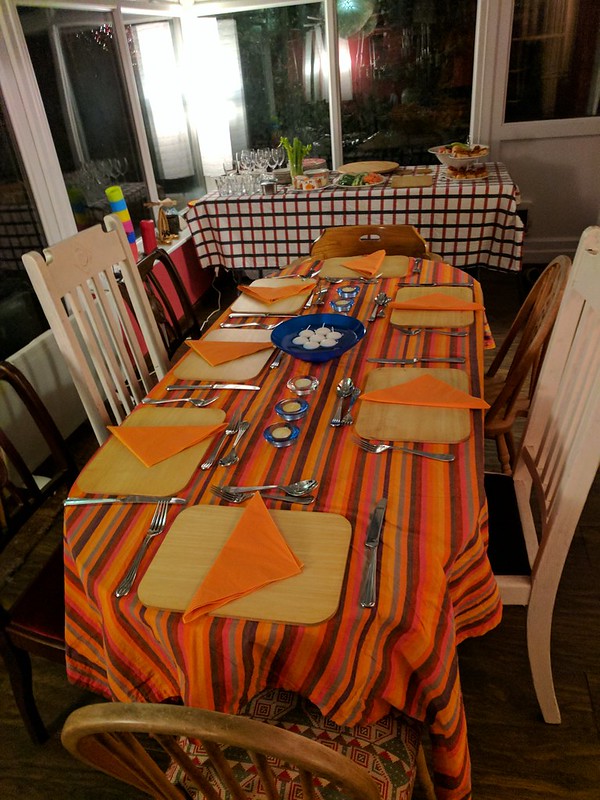 In the end we had a much  more manageable 8, the core team of ringers, and we could sit around one table and use the new trestle as a buffet table again.

There were aspects of the food where my mind was still on a larger number, so I massively overcatered and there are a lot of leftovers.

We had young people and drivers represented, as well as vegetarians so there were some menu challenges, but quite quickly I settled on… 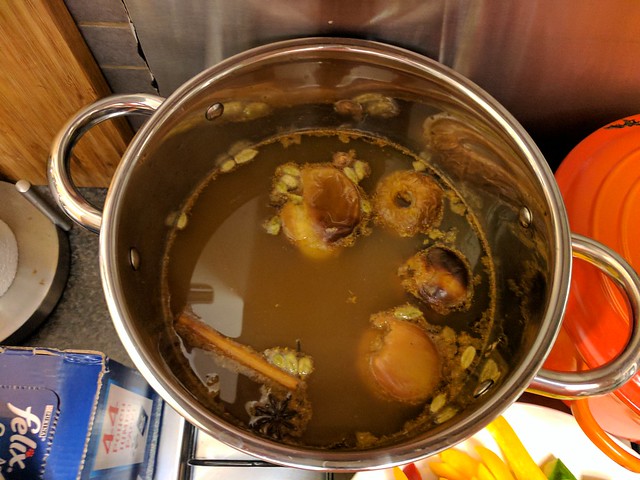 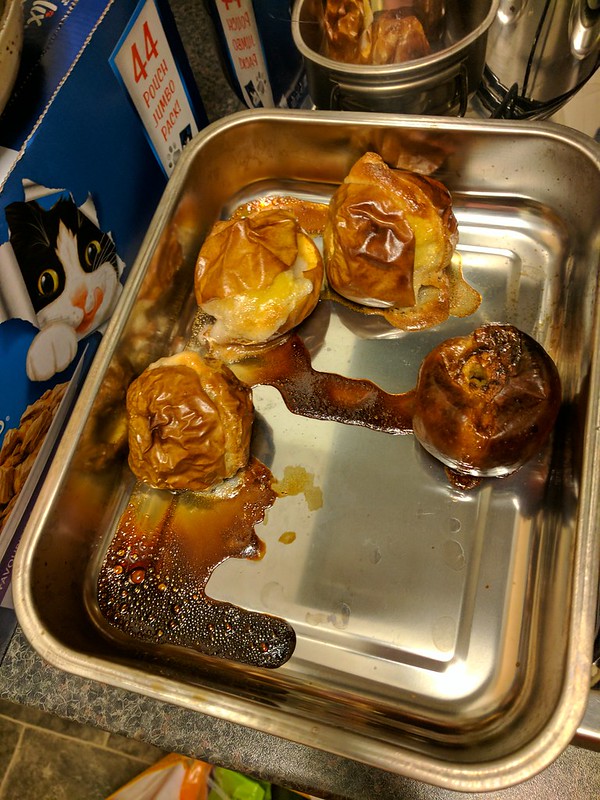 Oven roasted apples – deglaze the pan on the hob to get the natural caramel flavour out.

Crudités and hummus (no caramelised onion hummus when I shopped, natch 😦 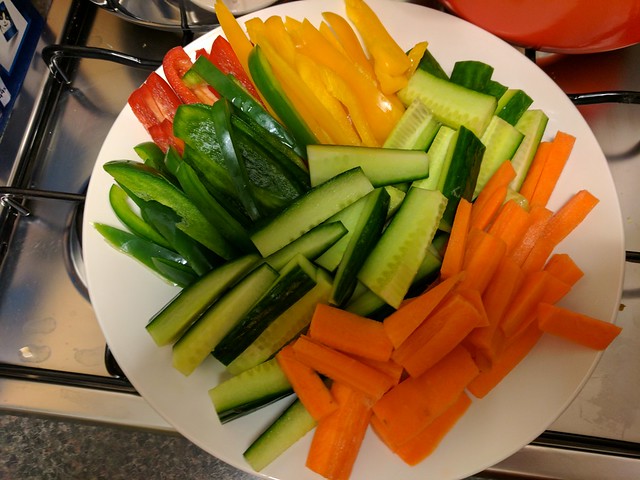 Bruschetta of sorts – Aldi’s jars of antipasti, one each of sundried tomatoes and roasted peppers, blitzed to make a pâté and spread on toasted baguette slices with an additional whole piece of pepper or tomato as a garnish. 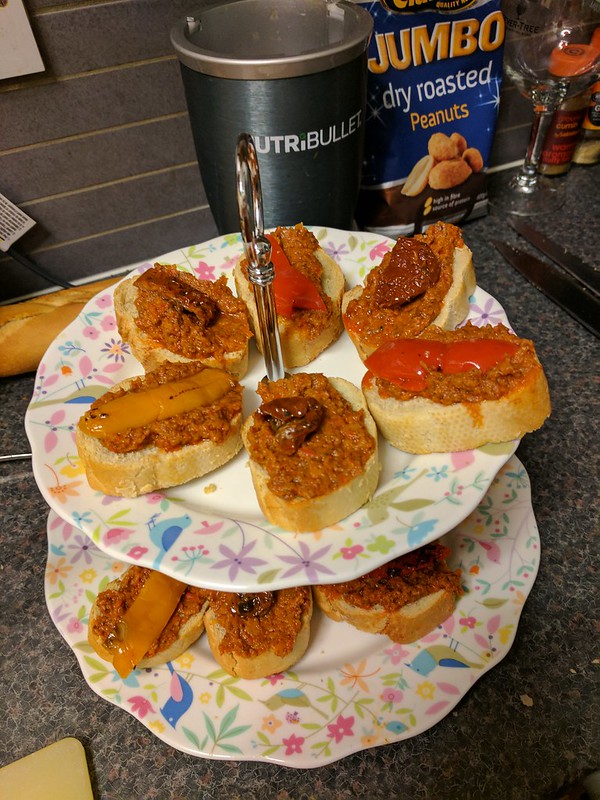 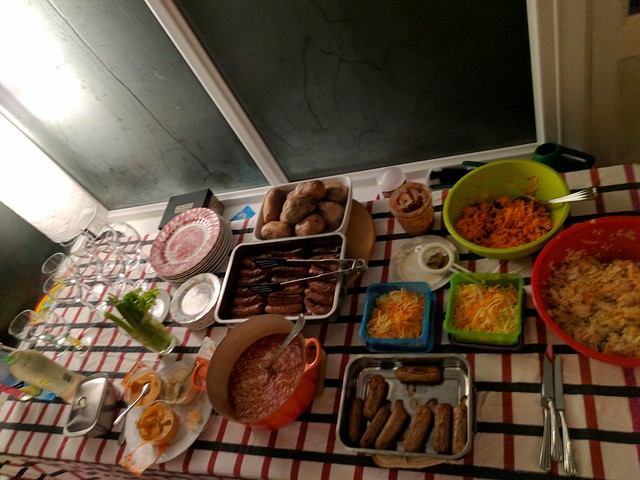 I have not used the food processor so much in ages! Grated carrots, cabbage and cheese in huge quantities. There is no need to make a whole cabbage of coleslaw for only 8 people, there is so much surplus!  The recipe was cabbage, carrots, 2 apples, 1 onion with a dressing of mayo, Dijon mustard and a little cider vinegar, salt, pepper, dried Italian herbs.  The carrot salad was carrots, sultanas, sunflower seeds with a lemon juice / olive oil dressing.

For dessert I used the rectangular tart moulds from Lakeland to make two cheesecakes. A slight wasted opportunity here – I could have made two different flavours – but the one was easier. Simple lemon cheesecake with four ingredients – 2 packets of Speculoos biscuits blended in the food processor, 160gr butter melted, and the base packed into the frame 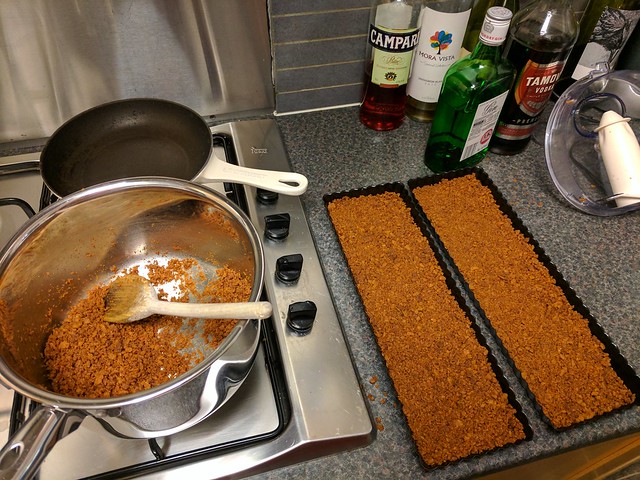 Chill for at least an hour, then mix 500gr mascarpone with a whole jar of lemon curd (411gr!) and spread on the top.

With the old Queer Eye for the Straight Guy maxim, “if it’s not garnished, it’s not finished” I liberally decorated with monstrously unseasonal berries and served on an Ikea bread board: 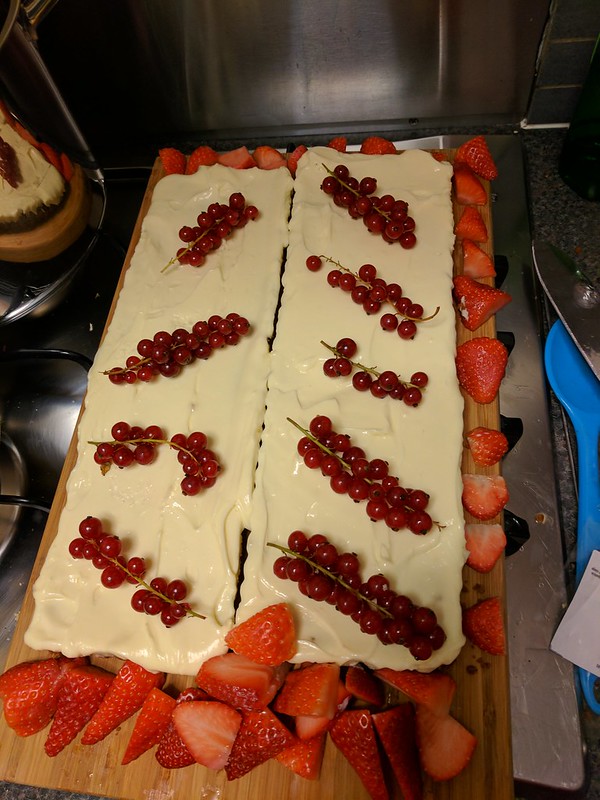 Coffees and chocolates – a box of Aldi Choceur Mint Selection, which I really enjoyed but don’t seem to have been eaten much by others.

I got my 10,000 steps wandering around my house cleaning and tidying and cooking, but really enjoyed putting a meal together for friends. I must do this more often 🙂

I also injured myself hanging fairy lights. They were in my front window for Christmas and I really like the warm glow they provided, so I decided not to put them away but hang them more permanently in my living room.

Unfortunately to hang them I decided to stand on a chipboard desk that couldn’t support my weight, so I fell through it. I have a huge graze and bruise on the back of my thigh, and the wrist I landed on is quite painful and I can’t lift anything with it.  This came on top of falling over hard on slippery mud in the garden one morning this week as I went down in the dark to feed the chickens before dawn. Add in a minor car accident as well and everything hurts! 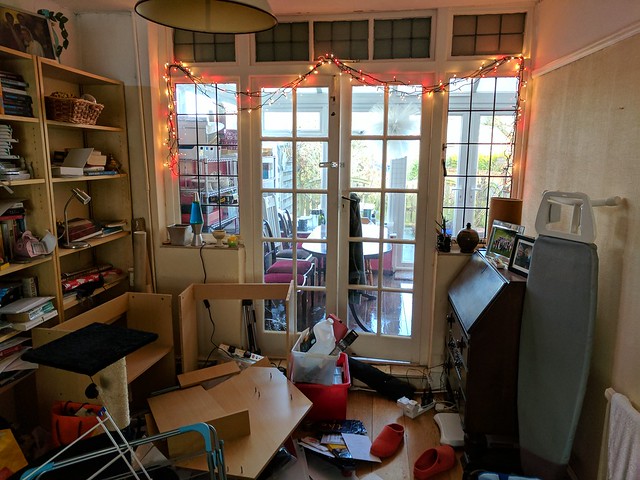 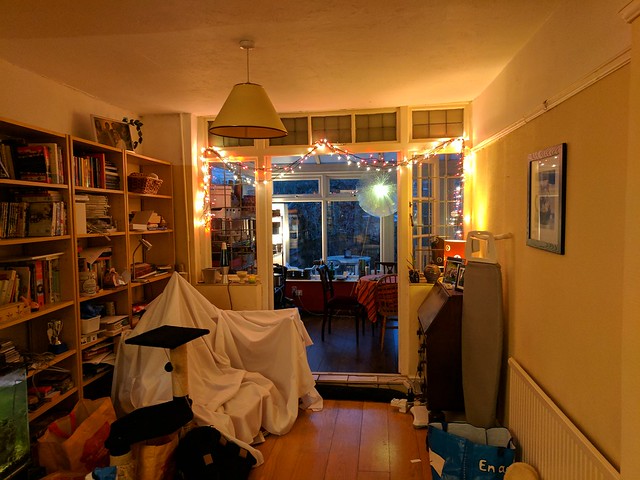