For a bunch of reasons, some of which I can put a finger on, some of which I can’t, I have been off my game since before the start of this year. One of the several ways this manifests itself is that I have been well off track in terms of planning and cooking. When I’m fully myself I like to have a list of meals coming up and shop sensibly accordingly. When I’m not, I find myself relying on the places I can drive through on the way home and find myself eating my dinner whilst driving so that I can go straight to bed when I get home.

Two Mondays ago it was pretty clear that some serious societal change was in the offing, so like many many others I decided to go home via the supermarket and stock up.  I spent a lot of money, filled the freezer and shopped around the gaps other people had left.  Two days ago, very clearly stuff was up – by then, schools were closed, although we had a whole staff meeting (on socially distanced chairs in the hall) at 8.15 to set out a plan for how we would cope with setting work and supervising the key worker children.  So again I called at the supermarket for long life essentials – and this time also stocked up on some nice things as the week before I spent a small fortune without even buying alcohol or chocolate!

So, the first Monday I made a huge pot of bolognese. This was all the more challenging because judging from the gaps in the shelves, everyone else had had the same idea. There were no celery, carrots, or onions. No mince of any sort in the fresh isle. No tinned tomatoes. 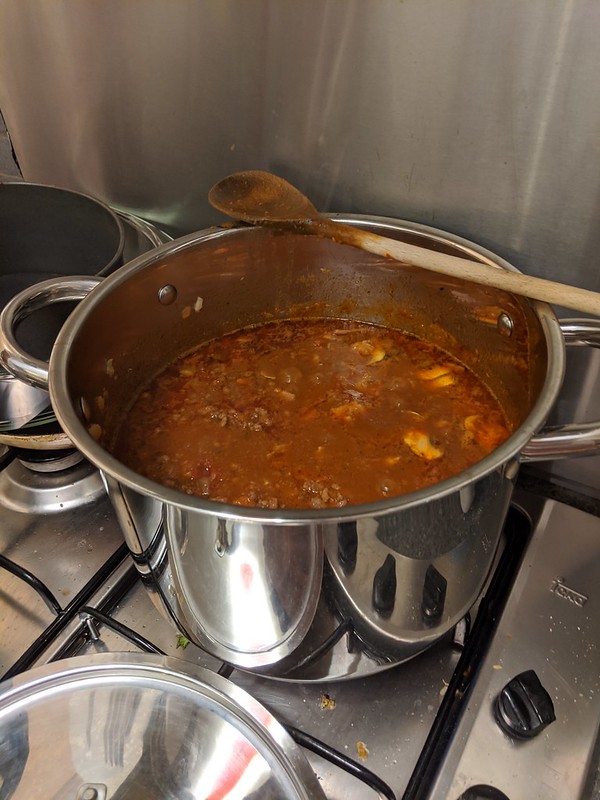 As it happens I pretty much always stockpile, so apart from the meat,  I had much of what I needed at home, including some wrinkly old carrots and onions. I eventually found a kilo of frozen lamb mince and used that. I blogged about a good mince sauce for pasta over ten years ago and I did just that. I also planned for the lasagna! I also hid a bit of extra veg from myself – supermarket trip netted a huge bag of frozen cauliflower and broccoli and I blended some of that till it was tiny and put it in the sauce and cooked down, and now you’d never know it was there!

My mince sauce was 8 portions – one that night (although I just ate it by itself because it took so long to cook I’d stuffed my face on bread by then), one the following night with a jacket potato, and then made lasagna at the weekend. 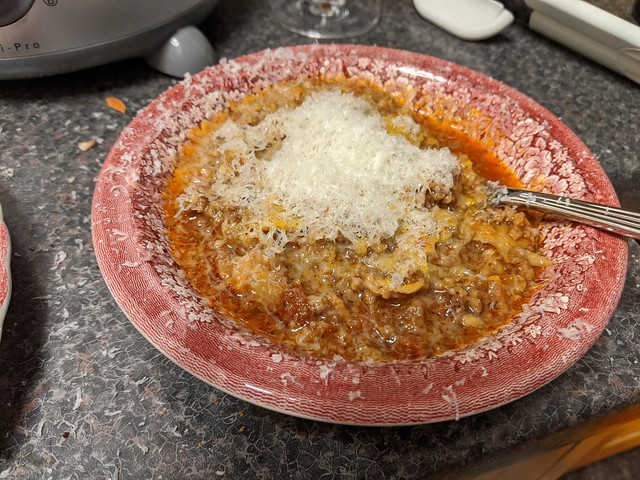 I am currently mostly cooking a meal for two each time I cook and having the spare one two nights later to try and avoid eating the same thing two days running.

Tuesday 17 – bolognese with baked potato. Cooked two potatoes to avoid toooo much wasted oven heat. Put the oven on a timer so it was ready by the time I got home from work.

Thursday – a pack of stuffed pasta with pesto. A delicious fast meal with nearly no nutritional benefits at all. All carbs and no vegetables. 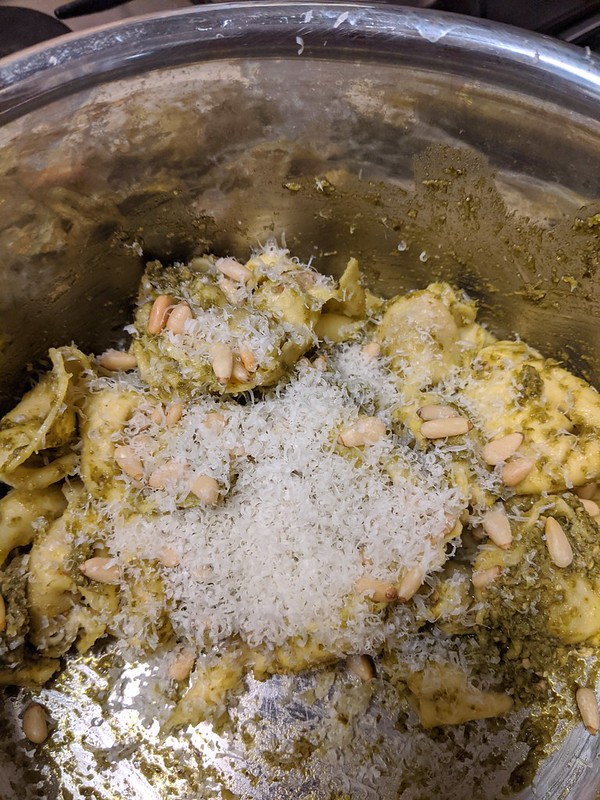 By Thursday school was already a bit odd… we’d closed to two year groups and Y11 got the news that they would not have to sit exams this year which turned their remaining lessons into end of term lessons.

Friday I had the other baked potato with cheese and beans 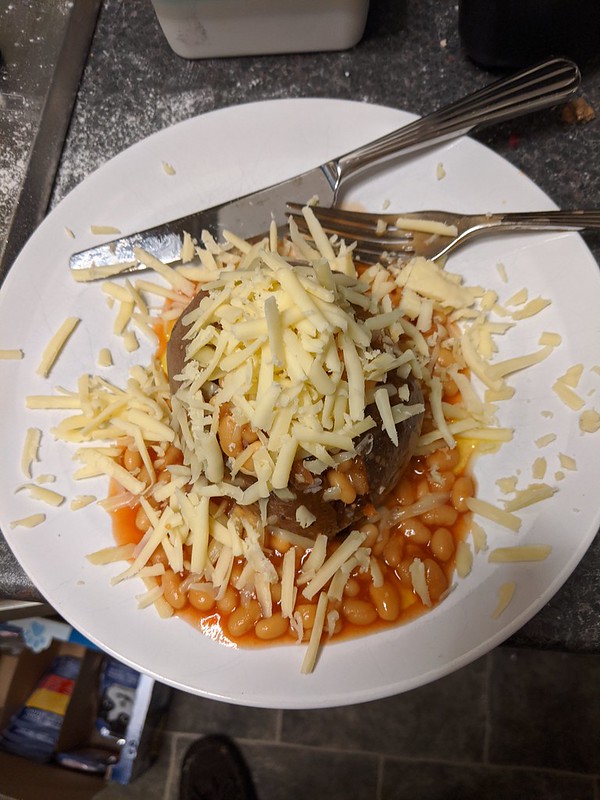 Saturday was the lasagna 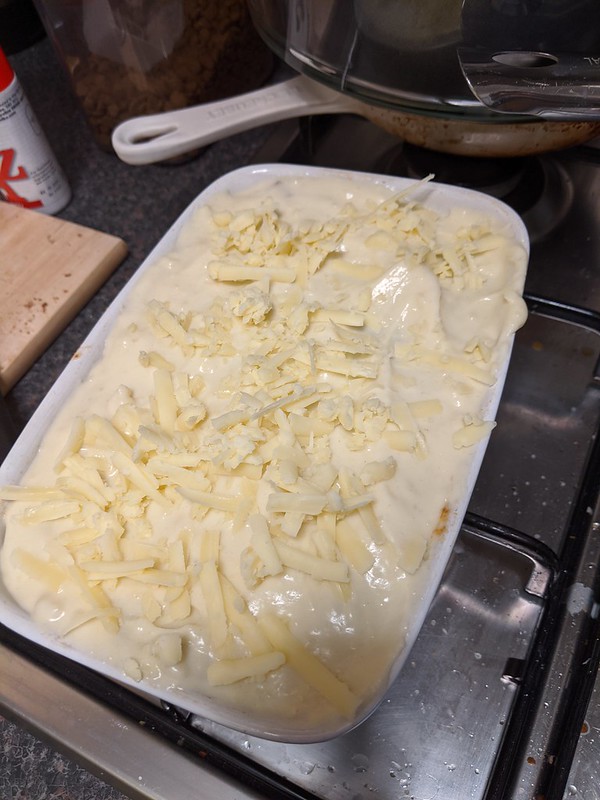 Sunday – the other half of the tin of beans turned into an all day breakfast. I ended up cooking 8 sausages to eat two and have been snacking on the rest of them ever since. 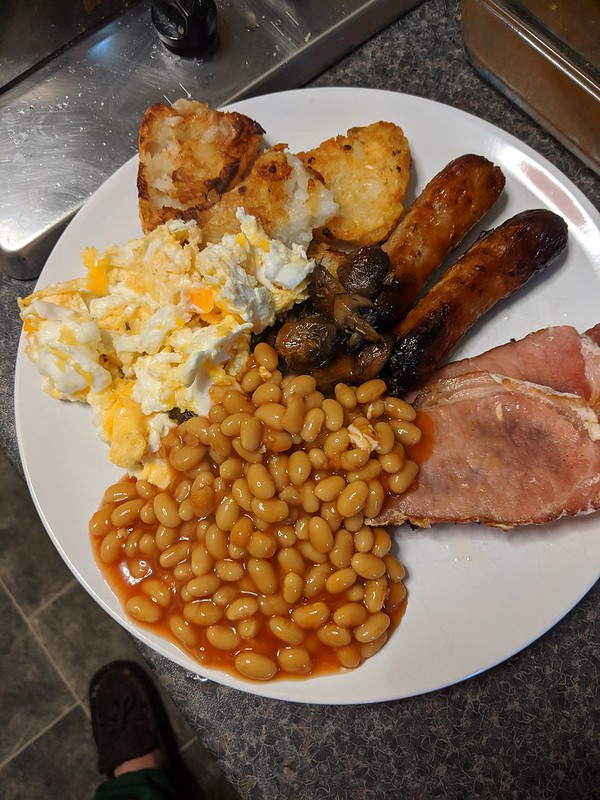 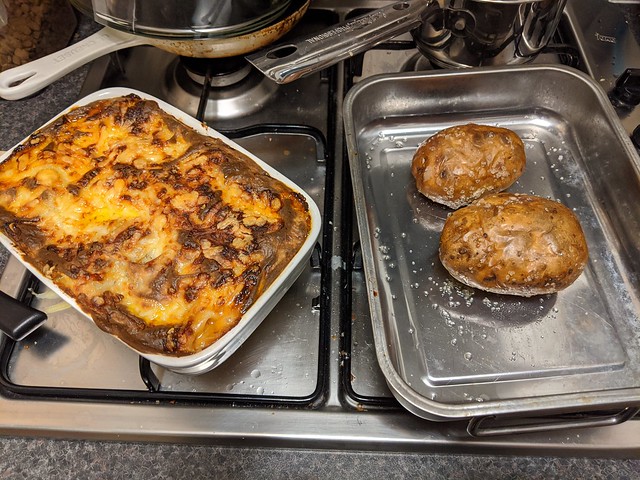 Tuesday – delicious mozarella pasta bake from this recipe I’ve been wanting to try for a while, although I simply left out the cream. Halved the recipe and ate only half of that and overdid the garlic. 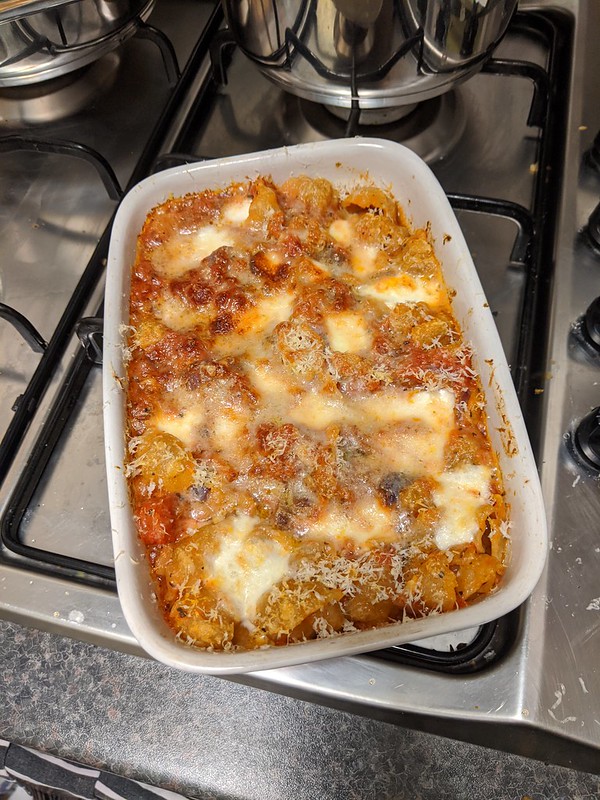 Tonight – even more jacket potato, this time stuffed with tuna and chopped pepper and onion. 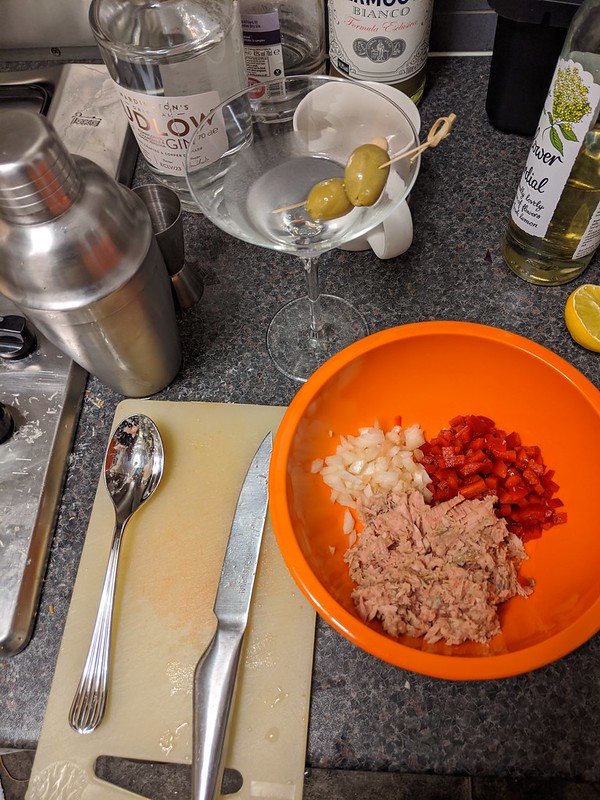 Future meals as of now…

Well there’s 5 portions of bolognese still in the freezer so that could be risotto bolognese or simply with spuds or pasta or as lasagna again.

I opened a pack of bacon for all day breakfast so that needs eating… could maybe have carbonara tomorrow. Could add in the leftover mushrooms too.

There’s half a veggie pasta bake.  Grief, but I’m eating a lot of pasta whilst the rest of the world has run short!

I have breaded fish fillets so they could be eaten with potato wedges as both need the oven.

Today I left the milk in the sun a bit too long so made rice pudding.

Plan to make a cheese sauce and a gratin (breadcrumbs in the freezer from a less than successful sourdough loaf) for that frozen cauliflower and broccoli mix.

In all this I have also resurrected my sourdough from frozen flakes and been baking bread with highly variable results… A fuller post on this another night. 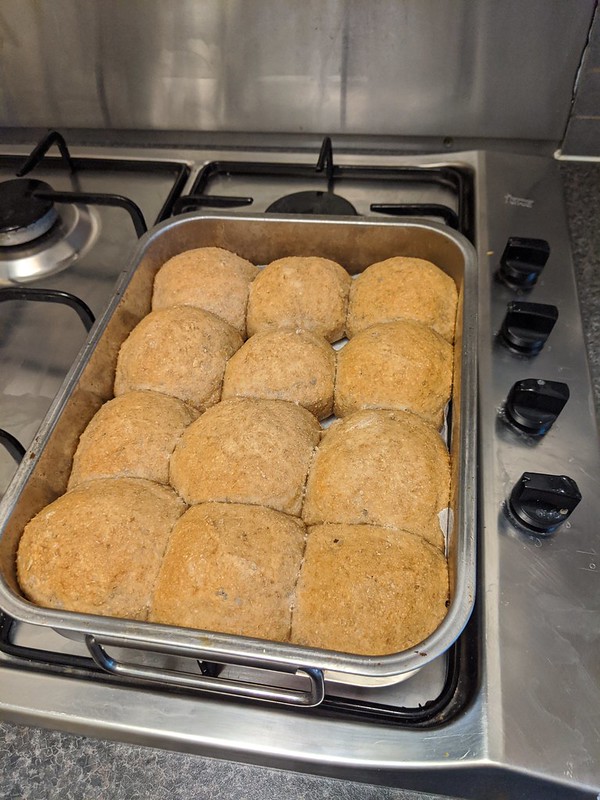 One comment on “Food in the time of Coronavirus”