I’ve settled into a normal routine of one big cooked meal in the evening with a variety of snacking throughout the day and evening.   Managing to go a long old time between supermarket visits – I went on Wednesday not because I’d run out of food but because I had some slightly specific ideas about what I wanted to cook over the bank holiday weekend. Specifically I wanted a chicken, which I was pleased to get.

Most things I wanted were in the supermarket and I again managed to spend a small fortune – in the long run although it’s only food for one person, it was a shop for two weeks’ food, so I suppose it’s not too bad really. I also found a rhubarb plant for the garden which is now planted… I wonder how it will do…

Alcohol is a bit of a feature – there is a fun weekly videoconference call with OutdoorLads where we all have cocktails and a chinwag.  I am still working through the last delivery from the Wine Tanker, although now I am out of red…  And recently I found the website Beer is Here, an industry sponsored directory to connect people to closed pubs and breweries who are nonetheless still providing a delivery service. They put me in touch with Adventure Beer, who, it turns out, are two streets over from me and specialise in Nottinghamshire breweries. 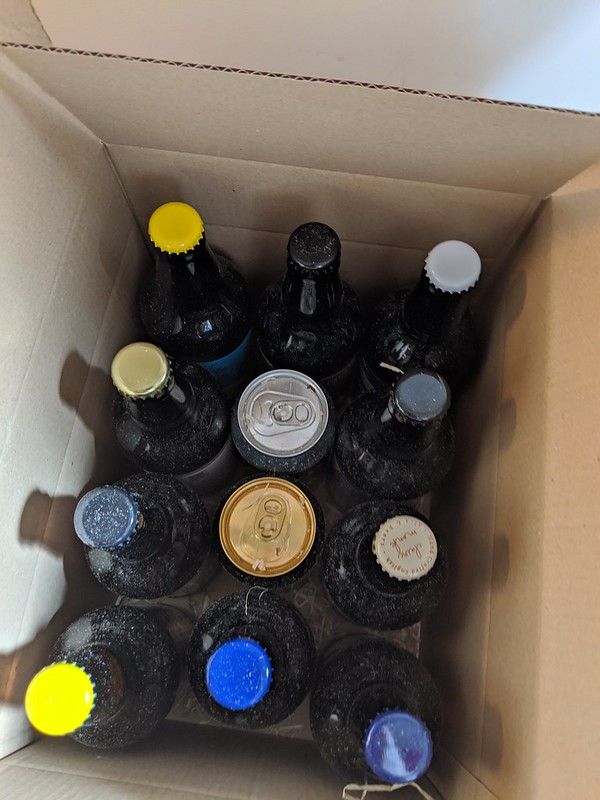 Here are some cocktail pictures to start with. The first week (we’ve had three of these now) I thought it would be fun to dress up and teleconf from the kitchen. By the following week I’d set up more of a zoomlab in the upstairs office and everyone else had decided to dress up but I’d decided to dress down.  Week two I joined late and just drank wine.

Red Snapper – a bottle of spicy tomato juice came with this month’s Gin Club and apparently if you make a Bloody Mary with gin, it’s a Red Snapper (with tequila, it’s a Bloody Maria)

Espresso martini. There was definitely something weird in the long-unused moka pot that I didn’t clean out properly.

White Lady – not many people have eggs spare for cocktails right now, I suppose. I started making these because they’re mentioned in a John le Carré book.

Tequila sunrise, only I don’t have grenadine so the red tinge is coming from Briottet Crème de framboise.

(I was making the cocktails with single shots, so it’s not quite as much alcohol as it looks like.

Risotto bolognese leftovers after the call finished, here’s Nigella’s recipe. It’s a great extra idea of a thing to do with a portion of frozen bol: just add stock, arborio rice and parmesan, optional glass of wine.  You don’t really need to defrost the bol before you start. This is from the huge bolognaise pot I made at the start of all this which is still in the freezer. So far it’s done pasta (but not spaghetti so far!) lasagna, risotto twice and topped a jacket potato.  To remind me to eat it, I’ve put “defrost bolognese” as a recurring event in my Google calendar which is also my meal plan. 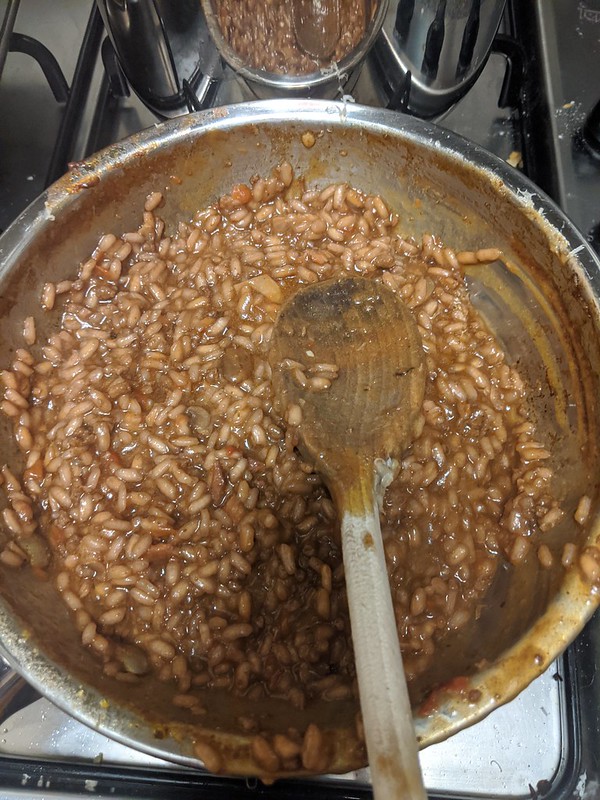 Neighbours left me some chocolate biscuit cake to thank me for the sourdough starter I gave them. 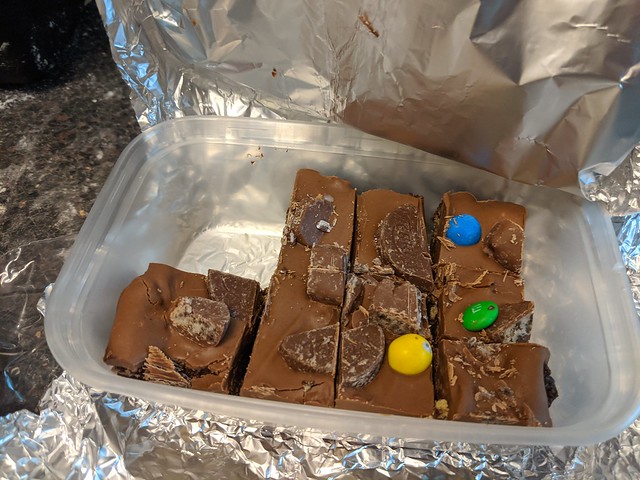 I made a double batch of sourdough which I turned into a loaf and tried Jamie’s rollup idea as well as a round loaf. 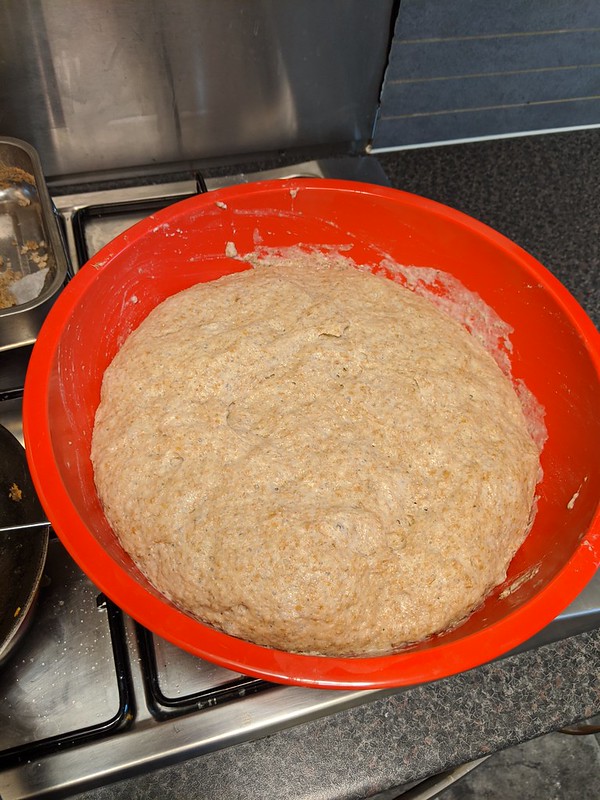 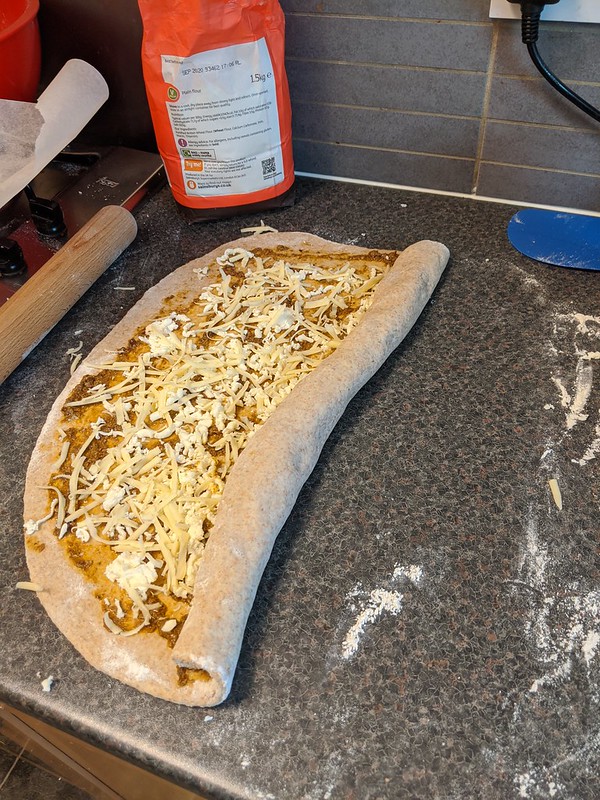 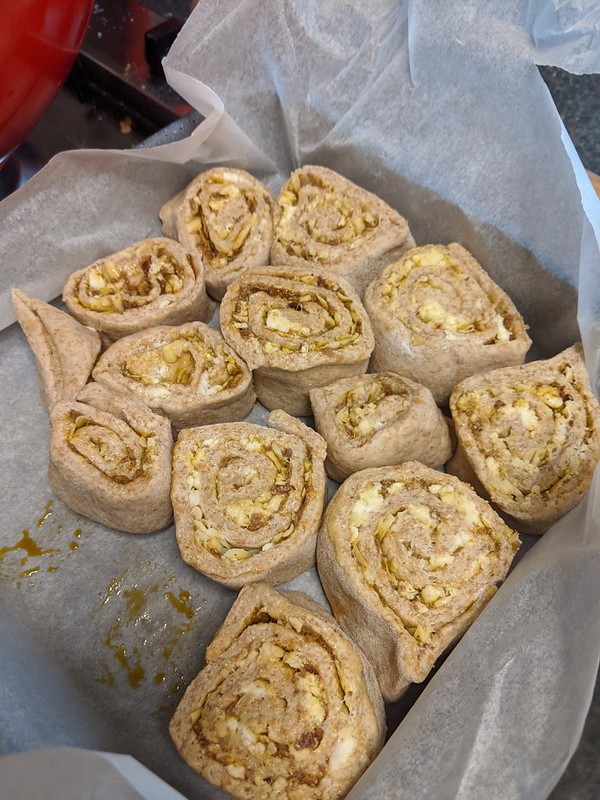 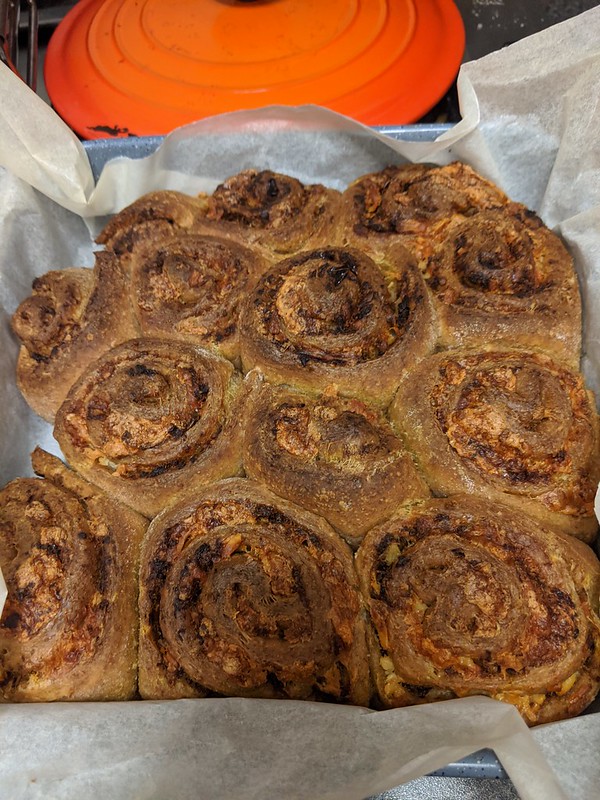 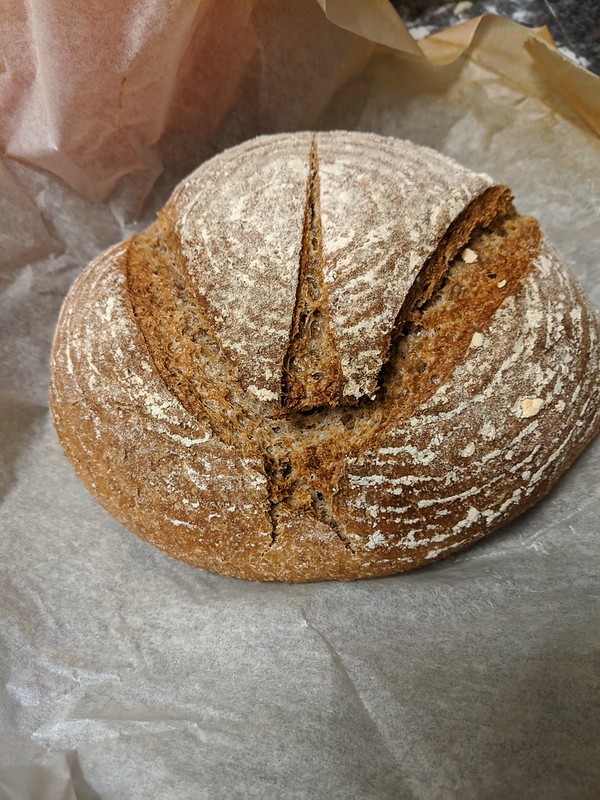 The day I made the bread the oven was really busy all day proving and baking the bread, so I actually phoned for pizza while it was cooking. Pizza Roma is still open. I tried to get ham, pineapple, mushroom and black olives, but I think all that arrived was ham and olives…

I don’t eat enough fish but a month ago I put fishfingers and breaded fish fillets in the freezer for a very easy way of getting fish portions into a week. Wedges are perhaps the easiest way to ape chips at home: cut up a potato, toss in olive oil and spices and herbs and salt and pepper and cook with the fish. 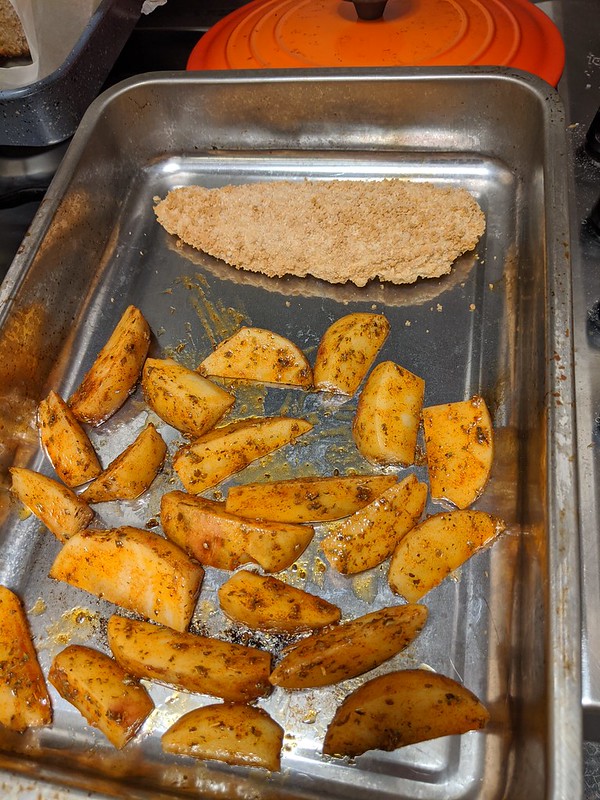 Conscious of not eating enough fruit and veg, I had some tinned pears and a banana with Nutella/peanut butter sauce.  (Nutella sauce – easy – microwave a few tablespoons of milk and a spoon of nutella – microwave a minute or so but stop just before it catches fire, stir.) 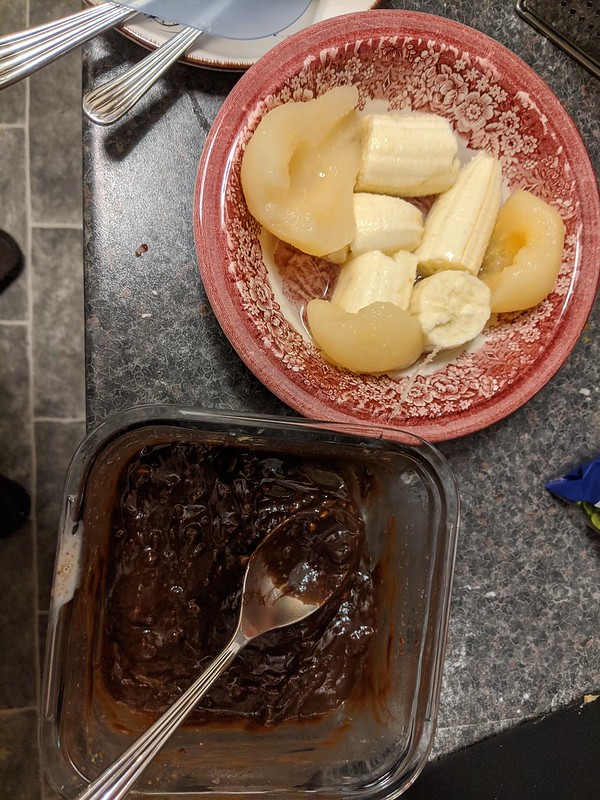 I am loving these new pots from Ikea – they come with a variety of different lids including a microwave one and bamboo ones. Brilliant for leftovers in the fridge because you can see what’s in them!

There’s a couple of things I ended up making just because I heard about them on the radio. The Kitchen Cabinet is back, and they suggested hummus, so I opened the last tin of chickpeas (that’s proven quite hard to replace) 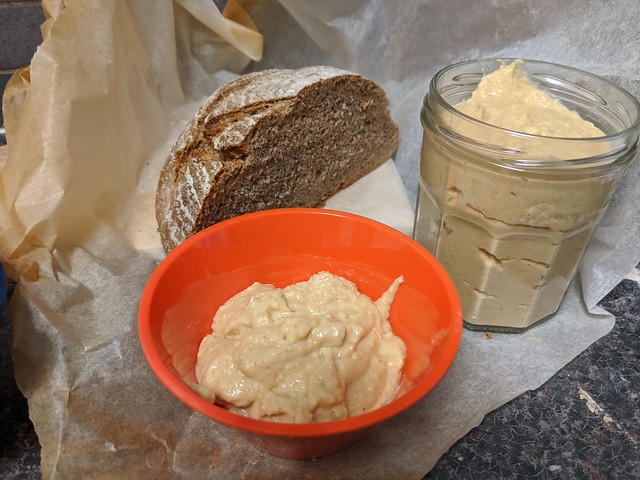 Great for using up really old bread and eating crunchy things like celery, radish, peppers, and getting an extra portion of fruit and veg. 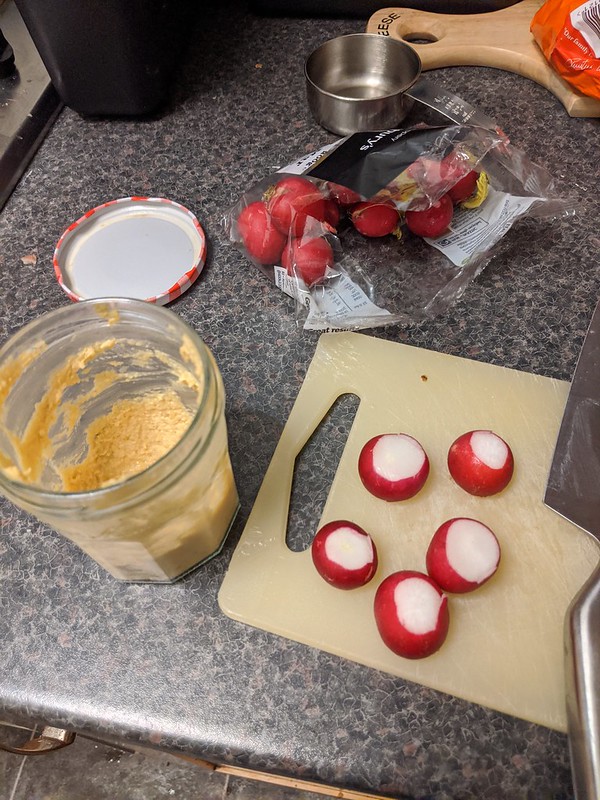 Sheila Dillon on the Food Programme was just talking about cake so I made a Victoria sponge. 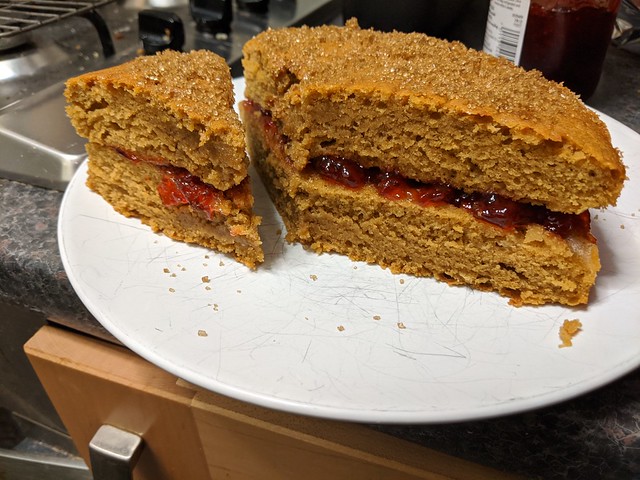 Dead classic – just jam in the middle and just granulated sugar on top. It’s a strange colour because I don’t have white caster sugar so made it the dark brown sugar I use for banana bread. I still don’t have scales so it was made with 4 eggs and essentially guessed quantities of butter, Stork marj, sugar and SR flour bought last year. 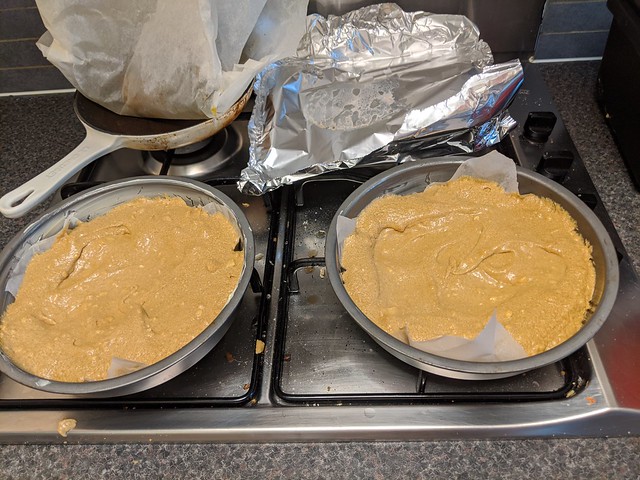 But one of them still wasn’t cooked properly so mostly made chicken food and I cut the other one in half. Don’t know why that didn’t occur to me before! 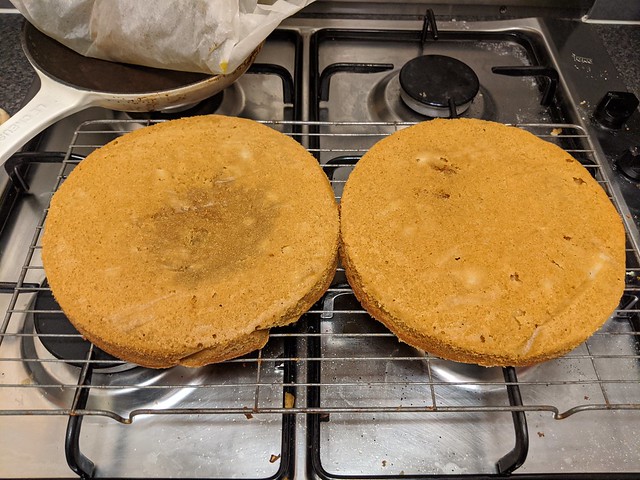 A  bacon joint made a really good roast dinner as a weekend treat: 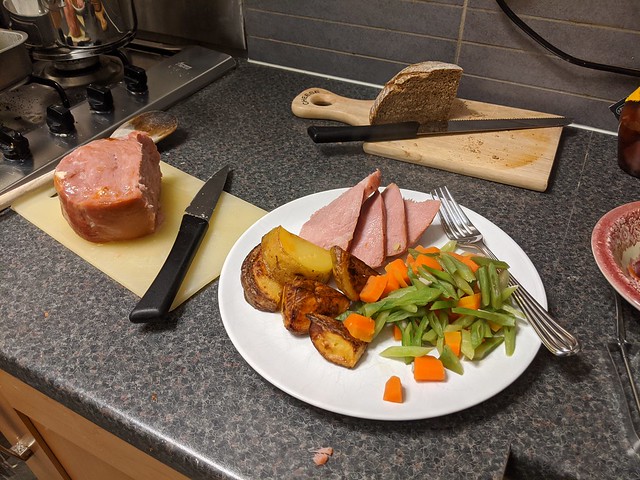 With frozen home grown beans from my neighbours (who’ve had a baby today!)!

The ham chunk is great for slicing and snacking, as chunks in carbonara (or wasabonara if you fancy adding wasabi?!) and risotto and cauliflower cheese.

Oh, yes, cauli cheese. I put this off for a couple of days and in the end made it slightly more macaroni than cauliflower because as a friend said on socmed, the cauliflower ruins the cheese. So mine had ham, pasta, cheese, the frozen cauli and brocc mix, and a breadcrumb topping. 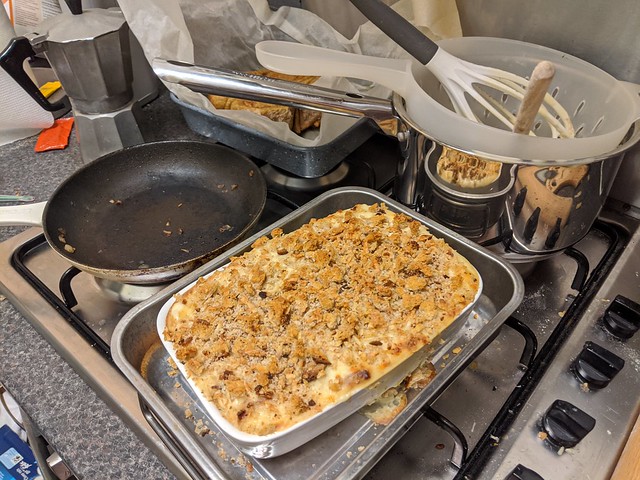 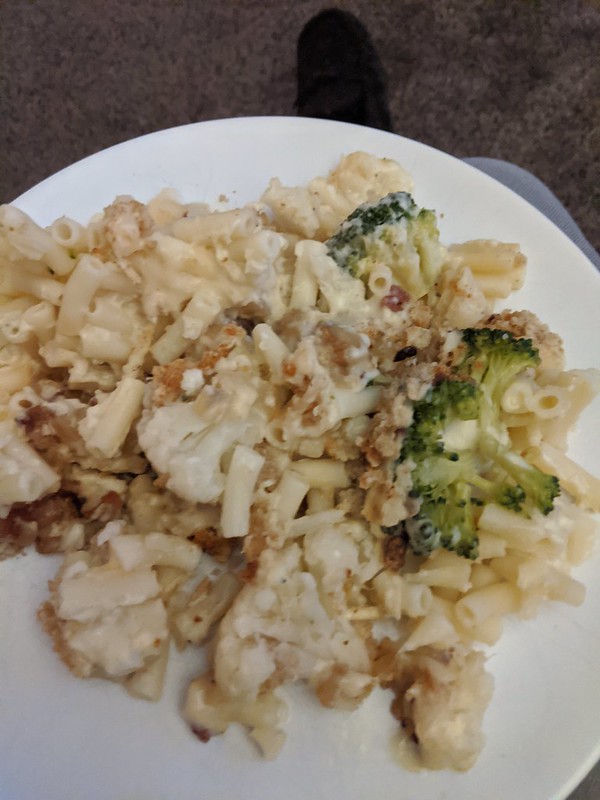 The ham also went in an omelette and I still have a chunk left.

Not eating enough eggs – every few days I leave a bunch on doorstep in a bowl and let the street-specific WhatsApp group know that they are there. 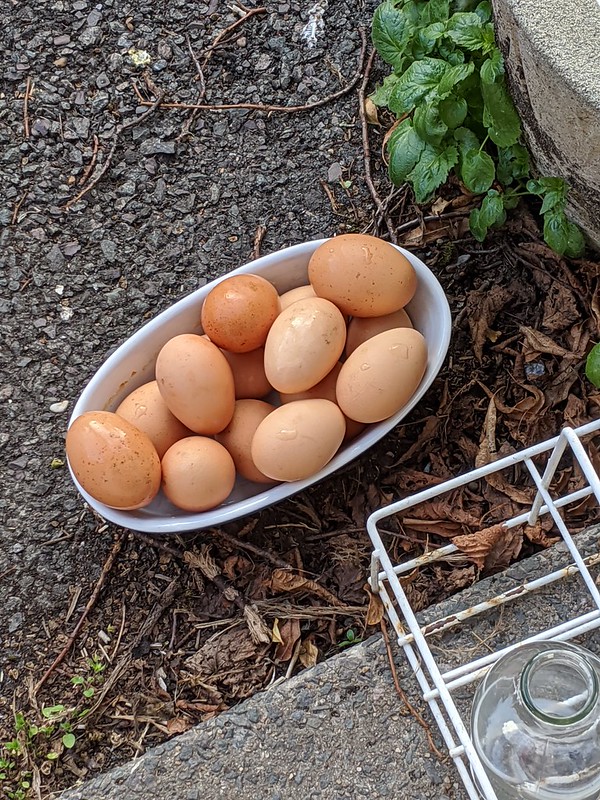 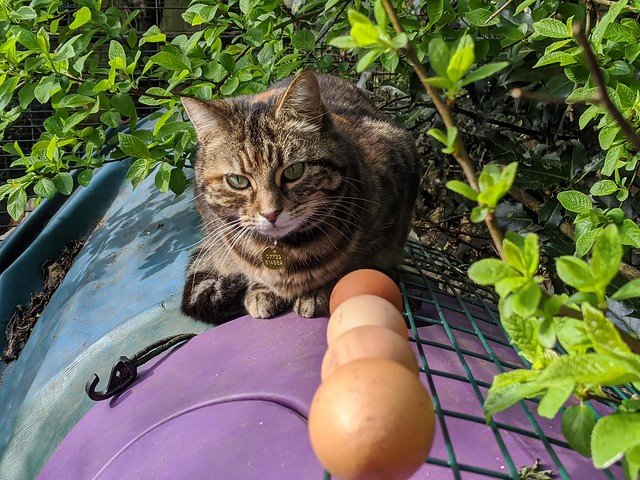 I’m enjoying playing with nail polish. Was trying to do a different colour each week, but didn’t quite manage it.

Sainsbury’s tinned ravioli is surprisingly good – the sauce has actual pieces of tomato in it.  I usually buy it for camping and at the end of year there’s still a can or two in the pantry. 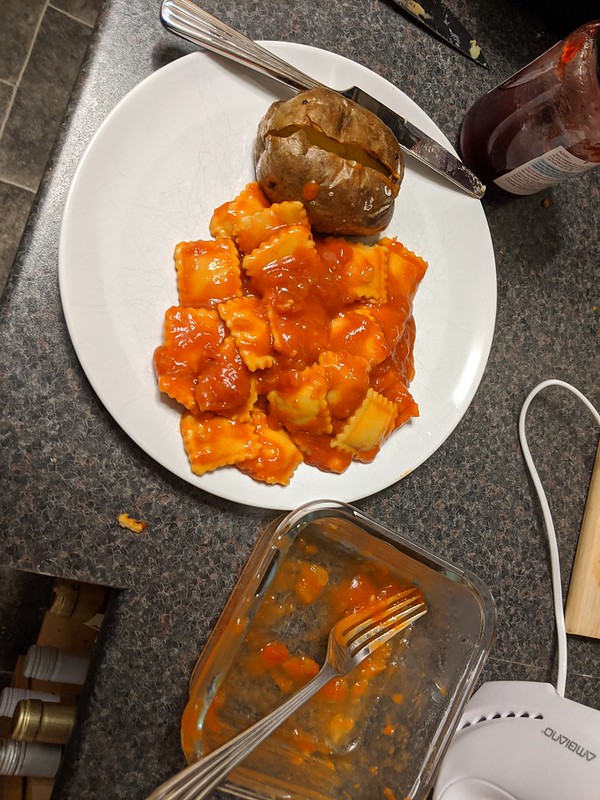 There’s lots of tins of soup and curry for the same reason. I’m mostly putting off starting them in case I do actually have a few days sick with flu and need super easy meals when starting to eat again at the end of it.

Neighbours have been pruning, so currently have a pot of clippings on their steps for people to help themselves to. I am trying to start cuttings: 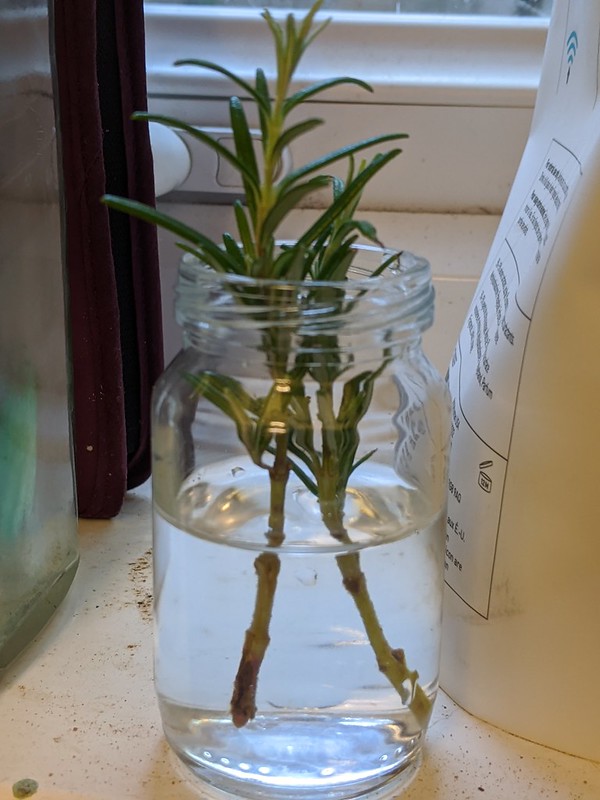 Just the same has happened with wild garlic and bluebell bulbs, all of which I’ve planted, so hopefully they will come up next year.

Did a fair amount of cooking over the Easter weekend. The main idea was to roast a chicken and make hot cross buns, which I did.

The hot cross buns are awful. I don’t know if it’s because my yeast is BBE 2012 or some other reason, but the recipe did not go well. They smelled wrong whilst cooking, seem a bit damp in the middle and just don’t taste nice. Such a lot of flour too! 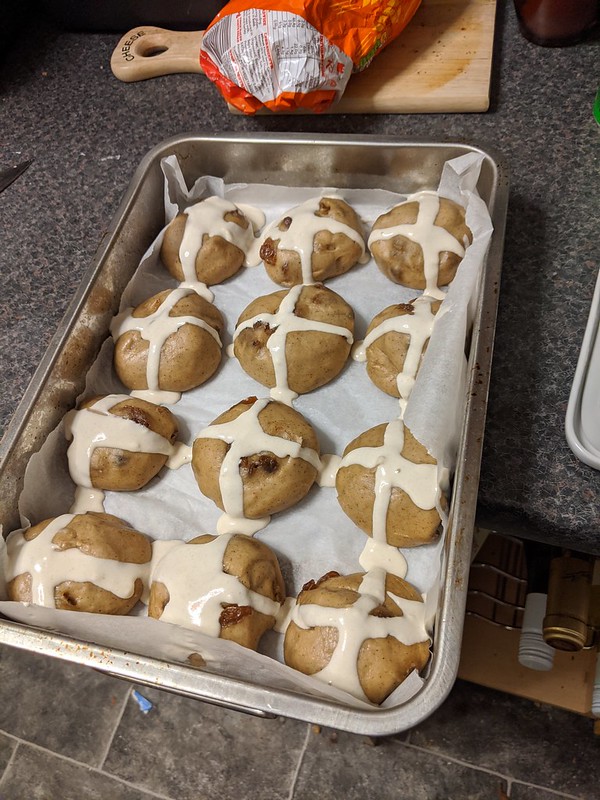 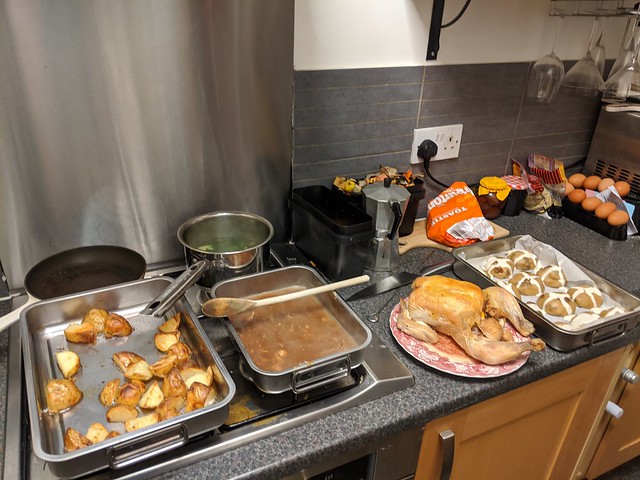 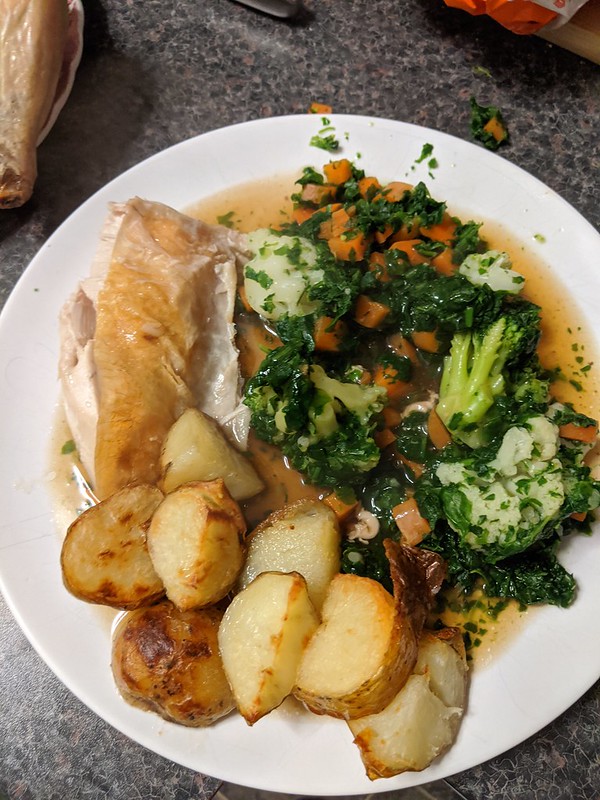 And with loads and loads of leftovers for next week’s meals. Risotto is planned but the idea has changed a bit with Jamie’s suggestion of a biyriani. I don’t have curry powder or paste so will have to improvise massively.

I am watching a huge amount of food TV at the moment – I am enjoying the daily glimpse into how awful Jamie Oliver’s hair is right now. I feel for Jack Monroe who finally got a daily TV show only to start coughing the night before and have to present it from their own kitchen across an incredibly flakey internet connection and a bizarrely hostile Matt Tebbut in the kitchen. Masterchef is continuing too.

More news on cooking in the coming days…