I somehow ended up with a surplus of mascarpone after buying a second tub forgetting I had the first. It keeps quite well but the last has just had to be discarded with blue furry bits. Here are some ways I’ve been using it, with nary a tiramisu in sight.

For a good old while I’ve been making vanilla mascarpone as an accompaniment for dessert instead of cream, custard or icecream. It’s astonishingly delicious and easier than homemade custard.  Just slash and scrape a vanilla pod to get all the tiny black seeds out and beat into a small tub of mascarpone with two tablespoons of icing sugar.

In 2009, a Lib Dem colleague suggested we should make lemon curd as something we could make and sell at Nottingham’s Green Fest. I duly did, and it was rather a pain and quite expensive. Smaller jars might have been a way of getting more money out of the endeavour since I found it took a pound of sugar and six eggs just to fill two empty Bonne Maman jars.

Anyway the reason for reproducing this story here was that the colleague who suggested I make it ended up buying a jar and reported back a lovely idea to use it in a simple dessert – she mixed the lemon curd with the same amount of mascarpone and used it to sandwich shop bought mini-meringues.

The same simple mix makes a delightful simple cheese cake. You can even make it with shop bought lemon curd, and make it in small quantities – so cheese cake for two – by making it directly into recycled Gü pots or shot glasses or espresso cups like this lovely set found in a charity shop when we were staying in Scotland for my brother’s wedding and used exclusively for desserts ever since. 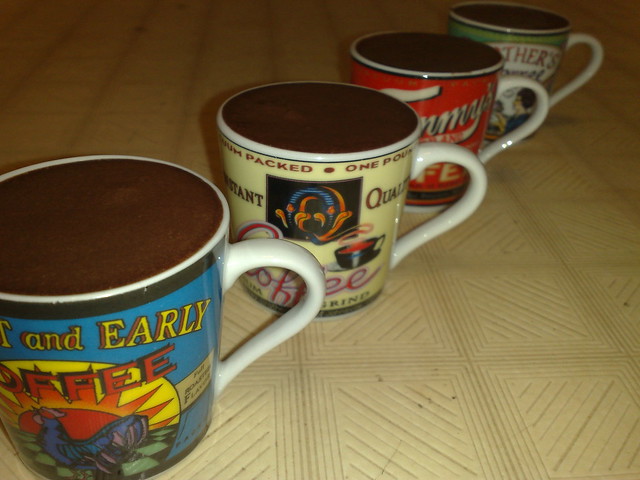 (pictured here on the old kitchen floor, as presumably at that point after making chocolate mousse, all of the available surfaces were covered in saucepans and whisks and bowls)

Mary Berry makes something similar using a ginger biscuit base.

Having successfully deployed the lemon curd / mascarpone mix sandwiched in meringues and as a simple fast cheesecake, I started to wonder if it could be mixed in other ways too.

Returning from Brussels last year I invented a recipe for a speculoos trifle – and blogged that recipe here.

Working further on the same idea and feeding a friend who does not like a dessert to be too sweet, I wondered about mixing the mascarpone 1:1 with bitter marmalade with thin cut shred.  This was… interesting. I piped it into shot glasses and instead of making a buttery biscuit base, I just scattered a biscuit crumb – speculoos again – over the top. Even for my friend’s savoury tooth this was not sweet enough. The bitterness of the marmalade did not quite overcome the sourness of the cheese and it was an interesting, not entirely unpleasant, but not brilliant flavour.  If I make anything like this again, I will sweeten it with icing sugar, I think. I was also wondering about how you could incorporate chocolate as chocolate and orange is a classic flavour combination. You could microplane chocolate into the mix, or include chocolate chips.  Dark chocolate would be a fab flavour to consider, but the multiple sources of bitterness from chocolate, marmalade and mascarpone would need something to lighten them.

What are you favourite ways of using mascarpone?

2 comments on “Fun with mascarpone”