Ouf, I don’t know where the time goes.

Anyway, since I last allowed me fingers to fly over the keys of the blog, we now have a veg box arriving, the first last Wednesday.

Astoundingly, it’s around six years since we last had a regular veg box, and that was not a universally positive experience.

Still, on verra. After all, I’m massively less fussy than I… no wait.

This week’s offering from Riverford was – with one exception – all perfectly normal stuff. Carrots, onions, mushrooms. Apples, bananas (not as many as I would like) and oranges, which we don’t really eat but I can happily juice. A salad bag, some celery. And the only slightly outré offering – a head of kale. I can cope with these things. I could cope better if we weren’t already quite well stocked with veggies, but no matter.

We’ve been living a little from the freezer anyway, and will continue to do so this week, but here’s what it vaguely looks like:

(drawing a veil over two nights of takeaway)

Saturday was a visit to friends – they fed us lovely onion tartlets and a leg of lamb, and I made Raymond Blanc’s pineapple sorbet and Nigella’s Nutella panna cotta. 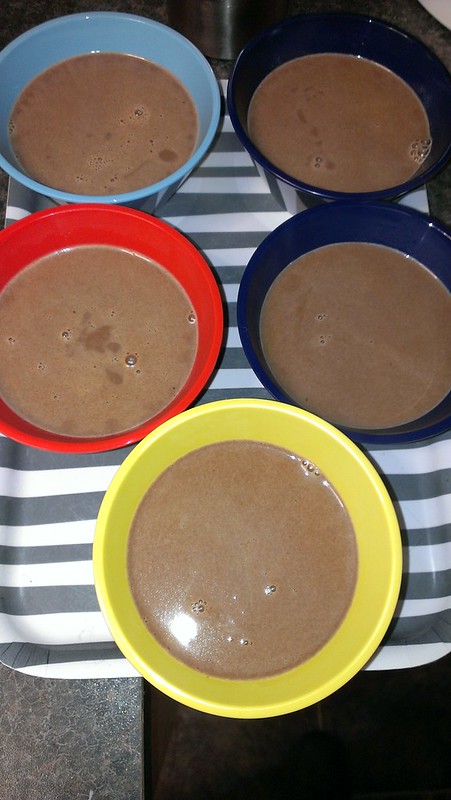 As written, the recipe needs more gelatin as the they did not quite set enough.

Sunday was the first real foray into the veg box – kale and potato cakes topped with grilled cheese and a celery salad with a mustard vinaigrette dressing. The potato cakes were made plainer than the recipe with no real spice at all, and were still good homely fare. The cheese helped no end.

Tomorrow, the plan is bangers and mash with onion gravy and the rest of the kale.

Tuesday, a small bag of pork mince from the freezer will become pineapple rice a recipe which introduced me to toasted sesame oil, a miracle flavour ingredient which does wonderful things to salad dressings and lifts the entire recipe up.

Wednesday is that busy night again, straight from school to yoga, and if we have the strength of mind not to come home via the chippy again, we shall have hummus and crudités and the remains of the veg box.

Thursday is the last day planned. Last time we had veggie falafel burgers the recipe made an absolute ton, so we shall be defrosting and frying the remains of that and eating it with pitta bread.