A colleague I share a class with set this task for one of my lessons with younger students. They seemed to enjoy it a lot and I have subsequently used it with KS4 students – and added a twist.

It starts with a model answer to a 90 word GCSE question. You can either write your own, or I heartily recommend Kate Jones’s resources – her writing booklets have questions for every AQA theme and sub-topic, every style of question, and a full set of model answers.

Start with your model answer. Remove sentences so that it only answers 3 bullet points.  Add in sentences that are not relevant. Print it big (eg big enough to fit 3 A4 sheets landscape) and cut it into strips*. Get kids to sort back into paragraph order.

My most recent iteration of this task had a double sided worksheet with the mark scheme for a 90 word question on the back, and on the front, the question (in the target language, like in the exam) and a translation of the text they are aiming to build. Most students used this, and recognised at least one word per strip, which they could use to get their bearings through the paragraph, but the most able could hide this support and try to rebuild the sentences without it.

The worksheet also had these tasks:

* To speed up the cutting, you can prep the photocopier with a pile of coloured sheets in the bypass tray, eg 3 yellow, 3 blue, 3 pink, 3 orange. Copy onto those sheets then cut up all 12 in one go and separate  out by colour. 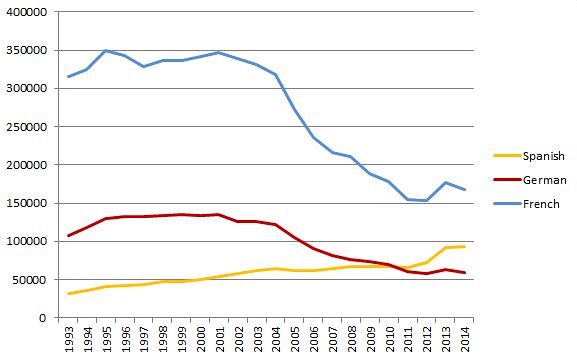 Frenchteacher.net has a post about checklists which is helpful, taking Mr H’s idea and running with it.

Here’s a way I’ve been using something similar to raise achievement in all my KS3 classes this year.

Our assessment scheme means all KS3 students do two or three pieces of formal, levelled writing which contributes to their termly reports. Last year I found they were too happy to keep making the same mistakes and not make any progress in their writing, so this year my idea to prevent this was to get them to look at their previous piece of writing before planning the next.

Since we are trying to help them prepare for GCSE controlled assessment the KS3 writing they do is planned and prepared in class, learned off by heart and then regurgitated under test conditions with maybe a cue card to help.

Our school has the Purple Pens of Progress as this year’s Ofsted gimmick – we mark in green and they respond in purple. So at the start of every planning lesson I make them write, in purple pen in their book:

This makes them engage with the marking feedback I spent hours writing on their last assessment (which is copied by them to a sheet in APP folders which they carry around with them at all times, so they should always have a copy). It makes them engage with the marking criteria to preempt conversations like “But I wrote LOADS!! Why didn’t I get a L6?” They know before they begin what features they need to include and a minimum length for their writing piece.

(Corn is connectives, opinions, reasons and negatives – they have sheets in their book and I have a display – the CORNwall – that helps with this.)

(The Y9 helpsheet talks about tenses and accuracy and has “very few mistaks” in it as my little joke to amuse myself. It was a loooooong time through the year before any student noticed.)

Googling random French words looking for stuff to teach birthdays and celebrations (*), I found a useful booklet with hundreds of grammar drills, gap fills, copy-and-conjugate, match the sentence starts and ends. They were pitched at able GCSE candidates and had lots of useful vocab. I was a little worried to start with that I’d accidentally found something I wasn’t supposed to be able to have without paying, but on closer inspection it turned out to have come from the Northern Irish curriculum agency.

I imagine there will be areas where the NI GCSE does not quite match the specs of AQA or other English exam boards but there is still plenty of top notch useful information.

There are microsites for French, Italian, Spanish and German, and although I haven’t explored the higher level at all, there are also productive-looking links for GCE A Level materials.

The main useful booklet I found was “Resource Pack Expansion Pack” – I haven’t even looked yet in the Resource pack.

One further source of usefulness, digging back in my memory, was pointed out by Steven Smith of frenchteacher.net. If you have run out of past papers to try (and some schools I know of have a compulsory “we do a past paper every half term in KS4 and 5” policy) it’s worth crossing the Irish Sea to try the archive of French exams over there.

(*) I just couldn’t stop myself: after we’d done “fêter” in five tenses, I pointed out you could do all the same for “peter” – to fart. Si j’étais poli, je ne peterais pas. Il faut que je pète.